11/03/2019 - Giancarlo Soldi’s docufilm, due to hit Italy as a special event from 11 to 13 March, focuses on the mysterious disappearance of the first designer to give a face to the famous Italian comic book hero

Despite being the first designer to give Diabolik a face (the hero of the famous 1962 comic book created by Angela and Luciana Giussani) the man himself has no face of his own. The person behind the very first Diabolik comic book (entitled The King of Terror) is in fact shrouded in mystery, a bit like the mystery that surrounds the character he designed, clad in a pair of black tights. And so, with his captivating docufilm Diabolik sono io [+see also:
trailer
film profile], Giancarlo Soldi flits between reality and fantasy, archival footage, interviews and imaginary reconstructions, as a means of deliberating on what might have come of Angelo Zarcone, who quite literally disappeared into thin air after delivering the initial boards for the first issue of what would go on to become a leading Italian noir comic.

They called him "the German" due to his fair complexion, his blond hair and his sandals (which he wore with socks), but few knew him personally. He did not have a home or a telephone and he would often go to the office to deliver his drawings and collect payment, until one day, when he dropped off the face of the earth. Two private investigators have been hired over the years to track him down, but to no avail. Soldi, who is a great fan of comics (he directed Nero years ago, a film written with Tiziano Sclavi, the author of Dylan Dog) and who wrote the screenplay with Mario Gomboli (the current manager of Diabolik, which still distributes three and a half million a year), conjures up a picture of an absent-minded Zarcone (played by an effective ‘diaboliko’ Luciano Scarpa), catapulted into the present day, wandering around the city of Milan in search of an identity, obsessed with the pair of eyes framed by a black mask that he finds sketched in his notebook, and a name that resounds in his head over and over again: Diabolik, Diabolik...

The fiction part of the film is accompanied by a hefty documentary section that traces the story of Diabolik’s character, building an identikit of sorts (a man perpetually in flight, a ruthless killer, not out of malice but out of necessity, a man deeply in love with a woman called Eva), through interviews with experts and enthusiasts, including the designer Milo Manara, the king of noir Carlo Lucarelli and the directors Antonio and Marco Manetti, who are currently preparing their next film on Diabolik. But the real jewel in the documentary’s crown comes with some old films by the Giussani sisters unearthed from RAI’s archives, in which we watch two elegant Milanese ladies sat with cups of tea, smiling gracefully while they chat about murders, thefts and pursuits. We hear them defend their creations when they are accused by Italian courts of corrupting the minds of innocent children and inciting crime, and we also observe them at work in their studio. They were ‘visionary entrepreneurs’ according to Soldi, who knew them personally and often went to visit them as a young filmmaker, creators of an unusual, surprising and intriguing universe, considering that it was created by two friendly ladies. Moreover, the entire Diabolik editorial team consisted of only women: one of the many curiosities unearthed by this documentary, a fountain of precious information for those who aren’t necessarily familiar with the Diabolik universe, but also fun for those who are well accustomed with it and want to fantasise, along with the director, about the fate of the very first, enigmatic designer of the King of Terror.

Produced by Anthos Productions with RAI Cinema in collaboration with Astorina, Diabolik’s publisher, and created with the support of MiBAC, Diabolik I is due to be released in 250 Italian cinemas from 11 to 13 March, with Nexo Digital. Its beautiful music was composed by Teho Teardo.

The Manetti Bros. are shooting Diabolik

The authors of Love and Bullets are adapting the adventures of the character created by the Giussani sisters for the big screen, with Luca Marinelli leading the cast

Giancarlo Soldi’s docufilm, due to hit Italy as a special event from 11 to 13 March, focuses on the mysterious disappearance of the first designer to give a face to the famous Italian comic book hero 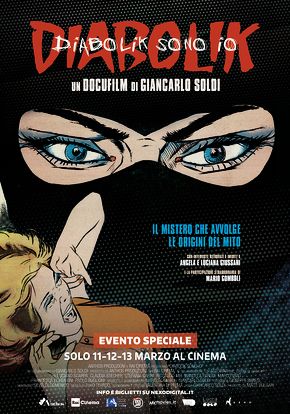 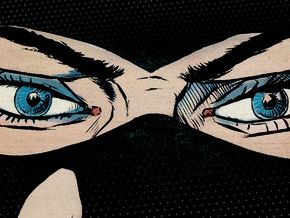