Kiki Sugino in A Picture with Yuki

Bulgarian director Lachezar Avramov's first feature, A Picture with Yuki [+see also:
trailer
interview: Lachezar Avramov
film profile], which competed in the main competition at the Sofia International Film Festival (7-17 March), is not only the first co-production between Bulgaria and Japan, but it is also an invitation to the audience to place themselves at the centre of a moral dilemma. A discussion on the topics of guilt, responsibility and forgiveness, interestingly the film also talks about racism and what makes us truly human.

The screenplay, written by Dimitar Stoyanovich and Avramov, centres on Georgi (Ruscen Vidinliev), a Bulgarian man living in Canada, and his Japanese wife, Yuki (Kiki Sugino). They are both now in Sofia, where Yuki tries to get pregnant through in vitro fertilisation procedures. When the doctor recommends that Yuki get some rest, the couple spends a few days in the countryside, but their bucolic happiness in the midst of nature will soon be shattered when Yuki hits Assencho, a local Gypsy boy, with the car. When the boy climbs back on his bicycle and hurries home, Georgi and Yuki are overwhelmed with relief, but the next day, they hear that the boy died, apparently by being beaten by his father. The news will propel the protagonists into a nightmarish world of torment and guilt.

The film's main purpose is to invite the audience into the characters' existential dilemma: are they guilty of the boy's death or not? Should they confess, even if there is no proof that the accident was the cause of death? And if it were, how could they let the boy's alcoholic father take the blame, especially when they are trying so hard to become parents themselves? But aren't they, as good, worthy, educated citizens, more entitled to a “normal” life than a Gypsy who beats his children every time he gets drunk? Even though the screenwriters allow themselves to be distracted by some irrelevant detours, the story deftly navigates the muddy waters of guilt and responsibility, pushing the protagonists towards a conclusion that may satisfy many in the audience.

Yes, A Picture with Yuki may be clumsy at times, with some attempts at comic relief that seem to be rather naïve efforts to convince a wider audience to watch an obviously difficult story, but the film must be welcomed as it brings an important social issue in the Balkans to the public’s attention: racism against the Roma community. It is commendable that the two Bulgarian features shown in the Sofia IFF competition (the other being Dragomir Sholev's The Pig [+see also:
film review
trailer
interview: Dragomir Sholev
film profile]) are so socially conscious, forcibly training the spotlight on topics such as underage bullying and racism, subjects that are widely ignored in the region or are dismissed with half-hearted, superficial comments like “Boys will be boys” or “Gypsies refuse to integrate”.

The way the protagonists behave is proof that goodwill, honesty and forgiveness are not related to one’s DNA or the colour of one’s skin, but rather to a character forged by hardship. Yes, the screenplay juxtaposes these concepts under laboratory conditions, perhaps too carefully stressing that moral values and social status are only vaguely related, but all that matters is that the topic is on the table. “Good things happen to good people,” says Georgi at the beginning, and the story soon adds layer upon layer of meaning to this debatable statement, sucking the audience into the debate.

A Picture with Yuki was produced by Chouchkov Brothers (Bulgaria) and co-produced by WA Entertainment (Japan). Domestic distributor Purple Rain will release the film on 5 April.

more about: A Picture with Yuki

Interview: Lachezar Avramov • Director of A Picture with Yuki

We chatted to Lachezar Avramov, a Bulgarian director whose film A Picture with Yuki has just won a Special Mention at this year’s Golden Rose Film Festival 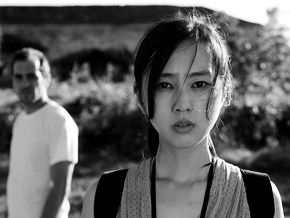