The old-fashioned feel-good Brit flick shows no signs of sinking with Fisherman’s Friends [+see also:
trailer
film profile], which follows the unlikely rise of a modern-day Cornish sea shanty-singing troupe. Loosely based on a true story, this light comedy-musical places a fictionalised version of the real-life band into a syrupy fable of redemption and underdog pluck.

While aimed primarily at the domestic market (where it was released this week by Entertainment Film Distributors, somewhat overperforming at the box office), the film has nonetheless also scored pre-sales in Spain (Sun Distribution) and Scandinavia (Scanbox). But despite a game cast including respected thesps like James Purefoy and Tuppence Middleton, the film falls far short of the Full Monty- and Calendar Girls-type appeal it is aiming for, as the amiable premise is capsized by some seriously sloppy writing and plotting.

With perfectly good intentions, the film’s writers (Piers Ashworth, Meg Leonard and Nick Moorcroft) try to ground its story as a stand-off between metropolitan and rural Britain. Director Chris Foggin begins with some striking shots of Port Isaac, Cornwall, still thriving thanks to its fishing industry and tourist appeal. Into this picturesque haven comes Danny (Daniel Mays) and his London music talent-agency buddies (Noel Clarke and Christian Brassington), on a lads’ getaway stag weekend. The proud locals tolerate the wealthy, condescending out-of-towners up to a point; once they are out of sight, traditional Cornish idioms like “emmet” (meaning “ant”) are muttered under their breath.

Towards the end of their trip, the Londoners happen upon an outdoor public concert being held by the Fisherman’s Friends on the main pier. Pitched as the “rock and roll of 1752”, the group of ten raggedly dressed fishermen storms through classic sea shanties to the delight of an all-ages crowd. Some have bawdy lyrics (one of the older singers yells, “Anyone want to suck on a Fisherman’s Friend?”), but the atmosphere is like a spirited country church fete. Astounded by the folk-music authenticity on display, Danny offers to represent the Friends, and begins an unlikely quest to get them signed by a major record label (and to woo the lovely local landlady Alwyn, played by Middleton).

So far, so charming. But in its second half, the film begins to add a slew of bum notes to its score. A lengthy subplot about the ownership of Port Isaac’s prized local tavern feels tacked on and too familiar from films of this type. Then there’s a toe-curling sequence where the Friends, in the city to seek fame and fortune, engage a trendy East London pub in an unlikely sing-along of “What Shall We Do With the Drunken Sailor?” Utterly unrealistic, it’s an emblem of the filmmakers’ struggle to do cinematic justice to this sweetly eccentric and very British true tale.

Fisherman’s Friends was produced by the UK’s Fred Films and Powderkeg Pictures, with financing from the USA’s BondIt Media Capital. Legacy Rights is handling the international sales. 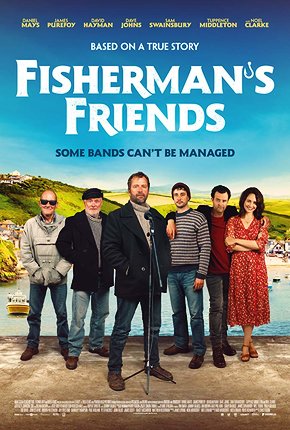