I imagine that the selection committee and programme directors of the 22nd Malaga Spanish Film Festival were thrown into quite a quandary after watching Ojos Negros [+see also:
trailer
interview: Marta Lallana, Ivet Castelo
film profile]: In which section would this little gem of a film be most at home? On the one hand, it’s the product of the final degree project of a couple of twenty-somethings, Marta Lallana and Ivet Castelo. On the other, the ZonaZine section prides itself on unearthing new talent (such as last year’s Yo la busco [+see also:
film review
trailer
film profile]by Sara Gutiérrez, a fellow Pompeu Fabra alumn), and it might just be too much for these tender youths to walk the red carpet at the Cervantes Theatre, scene of the Official Section’s nightly galas. And yet, this film has merits and virtues enough to compete with the very best of new Spanish cinema; in fact, it has a quality, maturity and boldness about it that would put some contenders for the Biznaga de Oro to shame. In any event, Spanish cinema can rejoice in the discovery of two young female directors worth keeping a very close eye on. The same might be said of their lead actress, Julia Lallana, the sister of one of the authors of this heartfelt portrait of that liminal time between childhood and adolescence.

Granted, this is well-worn territory for filmmakers, but Ojos Negros brings a humility, simplicity and honesty to its task that deserves our praise and commendation. It’s a fresh, unaffected and exquisitely detailed portrayal of those long childhood summers spent in the villages of grandparents and other family members that will be familiar to so many Spanish viewers. Family feuds, first true friendships and the indelible (and inescapable) heartaches that mark the end of innocence all have their place in this story, written by the directors together with classmates Iván Alarcón and Sandra García under the guidance of teachers including Jonás Trueba, Mar Coll and Clara Roquet (co-writer of The Days to Come [+see also:
film review
trailer
interview: Carlos Marques-Marcet
film profile]).

Featuring a soundtrack by Raül Refree (Between Two Waters [+see also:
film review
trailer
interview: Isaki Lacuesta
film profile]) that perfectly captures the emotions evoked by the film’s intimate and naturalistic cinematography, Ojos Negros begins and ends with a close-up of its mesmerising lead. Between the two lies a little over an hour of screen time for us, and a life-changing personal journey for the central character. In the opening scene we see her sitting indoors, passively listening to what’s going on off-camera, and witness her emotional response. At the end of the film, she is surrounded by nature, the wind and a new sense of freedom; after what she has been through this summer, her life is heading in a new direction. She is not the girl she once was.

Anyone who tags along on the emotional journey of Ojos Negros (named after the village in the Aragon region of eastern Spain where it is set, the backdrop to many family holidays for one of its directors), would conclude that its creators were influenced not only by recent films like Carla Simón’s Summer 1993 [+see also:
film review
trailer
interview: Carla Simón
film profile], but also true classics like El sur and The Spirit of the Beehive, both made by Victor Erice some decades ago. It has a similar aspiration to all of these films, precisely evoking the same sense of confinement and, paradoxically, freedom that permeates these communities and homes, with their dark sides and soundscapes, where time seems to stand still and every visitor feels like a stranger, but finds acceptance all the same.

Ojos negros was produced by Nanouk Films, and will be distributed by Filmin, which co-produced the film alongside the Pompeu Fabra University in Barcelona.

Since yesterday, various projects in post-production and in search of funding and distribution have been viewable online as part of the industry strand of the postponed 23rd Málaga Film Festival

BERLINALE 2020: With sensitivity, Pilar Palomero’s first work recreates the repressive atmosphere which far too many Spanish girls grew up within towards the end of the 20th century 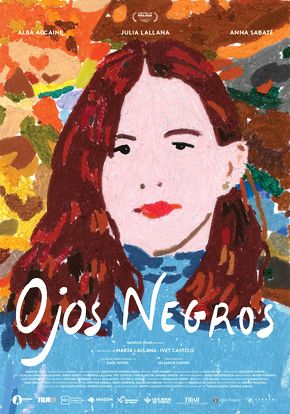