The newest film by South African sociopolitical documentarian Rehad Desai, Everything Must Fall [+see also:
trailer
film profile], which recently won the Best Film Award in One World Prague's Right to Know section, chronicles the Fees Must Fall movement, which developed from a student protest in one of the elite universities, enveloped the whole country and spread to encompass wider social issues in the deeply divided state.

Since 2009, student fees in South Africa have been rising steadily by 9% annually, until in 2015 this increase jumped to 10.5% and prompted students at the Johannesburg University of the Witwatersrand, aka “Wits”, to start a protest under the title and hashtag #FeesMustFall. Led by four students, the most prominent of whom are Shaeera Kalla and Vuyani Pambo, as well as Simamkele Dlakavu and Nompendulo Mkatshwa (now a parliament representative), the protest also included underpaid university workers, and this large group occupied the Solomon House, the main building at the university, demanding the fees be cancelled.

Vice-chancellor of Wits Adam Habib, himself a former activist during student protests in the 1980s, is also interviewed in the film, and an objective viewer cannot but understand his position: as state subsidies decline, private fees must go up in order to keep up the quality of education. The problem, naturally, lies in the state itself and all of the promises that Nelson Mandela's African National Congress, still the leading party in the country, failed to deliver on.

Soon, 16 other universities and 11 colleges join the protest and stage a national shutdown: none of these institutions will work until the demands are met. After the Minister of Higher Education announces that the fees will only rise by 6% and mocks the students in the process, the demonstrations spread out from the campuses and reach the streets of all major cities, where the participants are joined by organisations such as the Progressive Youth Alliance and parliamentary party Economic Freedom Fighters. The vastness of the movement forces President Zuma to promise a full annulment of the rise in fees, but this is where the movement itself starts showing cracks. Even with just a regular fee, most universities are out of reach for the poor, black population. Also, divisions along gender and sexual orientation lines start to emerge, and when the 2016 school year starts, the campuses are flooded by private security, intimidating the students when they are seen meeting in groups. As a new wave of protests begins, the government deploys police armed with rubber bullets and tear gas, escalating the situation immeasurably. And Habib's role in this is in no way an innocent one…

It is a long and complicated story, and Desai shows admirable focus in telling it. He mostly follows the events at the Wits, although other schools in the country did significant things, like removing the statue of apartheid ideologue Cecil John Rhodes at the University of Cape Town. The decision to focus primarily on the women student leaders is also significant because of the inevitably intersectional nature of any protest in South Africa.

The director uses large, slogan-like narrative titles to underline particular scenes, especially in numerous segments showing conflicts with the police, and adds in tweets from student leaders, reflecting on the key role of social media in the movement. The historical background is laid out concisely throughout the film, and all of the interviewees are more than well versed in the legacy and importance of social struggle in the country – and worldwide. Like many popular movements, Fees Must Fall has displayed many shortcomings, but this movie proves that it was undeniably a crucial instrument of tumultuous social change.

Everything Must Fall is a co-production by South Africa’s Uhuru Productions, the Netherlands’ IKONDocs and Belgium’s Story House. Germany’s Deckert Distribution has the international rights.

more about: Everything Must Fall 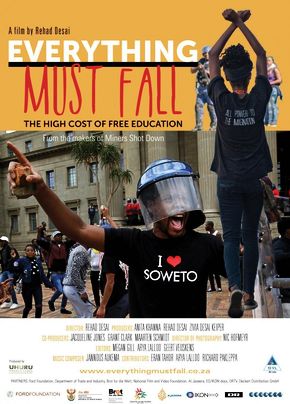 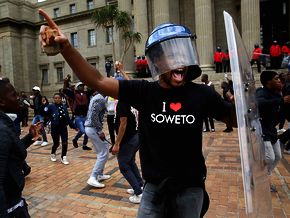 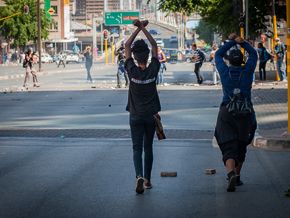 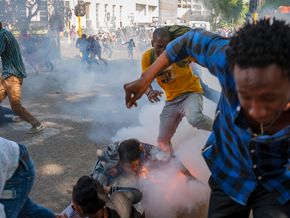 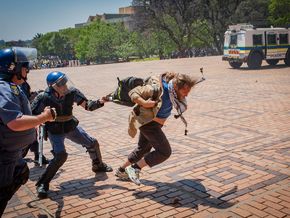 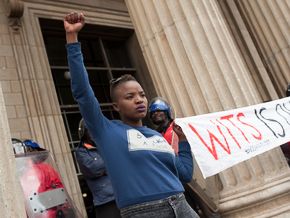