The 16th edition of Sofia Meetings (13-17 March) has just wrapped. Taking place during the 23rd Sofia International Film Festival, the industry platform was divided into two main sections: the co-production market, with 26 projects selected (see the news), and the works-in-progress screenings, boasting 16 films in post-production (see the news). Here, Cineuropa profiles the winning projects in the competitive co-production sections (you can also read the news about the winners).

No Land for Me - Ram Nehari (Israel)
The sophomore feature-length drama by Israeli director Ram Nehari, known for his debut sentimental dramedy Don’t Forget Me [+see also:
film review
trailer
film profile], deals with the latest generation of immigrants who arrived in Israel after the fall of the USSR. Set in 2002, during the peak of the Second Intifada, No Land for Me follows teenage Russian immigrant Alex, who grows up in a land of violence and turmoil while he is simultaneously torn between his new Israeli identity and his homeland’s obligations of “becoming a man”. The script is written by Yair Grinberg, and the movie is being produced by Yifat Prestelnik, for Tel Aviv-based Yifat Prestelnik Films. 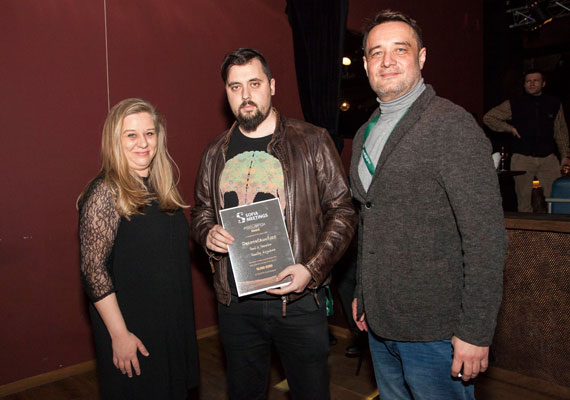 Pavel G Vesnakov (centre) with his award for Deconstruction

Deconstruction - Pavel G Vesnakov (Bulgaria)
Bulgarian director Pavel G Vesnakov, who has won myriad awards with his well-travelled short-film trilogy, is working on his debut feature, Deconstruction. Written by the director, it is an intimate story that follows 50-year-old astronomer Angel, who has spent 22 years of his life in the observatory on Mount Rozhen, which boasts the biggest telescope in the Balkans. His rather conventional and harmonious life will be disrupted when he learns that the government has decided to close the facility and build a NATO military base in its stead, and he has two weeks to pack his things and leave. The project is being produced by Veselka Kiryakova, of Red Carpet. 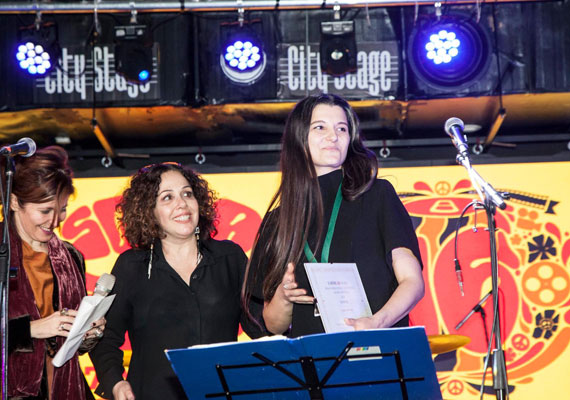 Inkwash - Sarra Tsorakidis (Romania)
In her debut project, Inkwash, Romanian writer-director Sarra Tsorakidis focuses on Vera, an aspiring painter studying for her PhD in Fine Arts. Despite being in her thirties, she is still supported financially by her family, and the flat where she lives is about to be sold. Vera is putting off making any big decisions in her life, until she accepts a painting job in an unfinished hotel in the Carpathian Mountains. The story is inspired by the friendship between Tsorakidis and actress Ilinca Hărnuț, and both co-wrote the script, while the movie is being produced by Anca Puiu, for Mandragora. 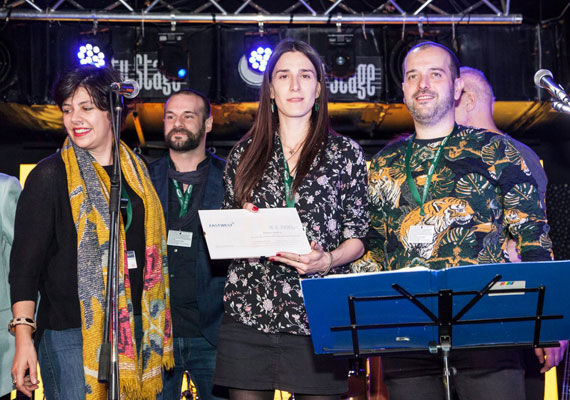 Gözde Kural (centre) with her award for Najva

Najva - Gözde Kural (Turkey/Canada/Bulgaria)
After her debut feature, Dust, which dealt with an Afghan woman who decides to travel from Istanbul back to Afghanistan to bury her mother, Turkish director Gözde Kural is following a similar path in her sophomore project, Najva. Written by Kural herself, the story tells of a mother who sets out on a journey to reunite with her long-lost son, after she survives the slaughter of their entire family in a Taliban raid in rural Afghanistan. It is a Turkish-Canadian-Bulgarian co-production by Uğur Can Gürsözlü and Gözde Kural for TOZ Film Production, with Marcel Giroux of GPA Films and Dimitar Gotchev of Dreams Industry.

Windy Days Are Good for Flying - Petar Krumov (Bulgaria)
Having worked as an assistant director on many recent movies, Bulgarian debutant filmmaker Petar Krumov is writing and directing Windy Days Are Good for Flying. The film portrays Deyan, a young, promising movie director who is developing his feature debut. In the process, he will encounter all aspects of the film industry, while the story he is developing starts merging with his own personal experiences. In fact, this is a story about lonely souls and Deyan’s realisation that despite his intention to tell tales about outcasts, he actually has nothing in common with them. Rositsa Valkanova, of Sofia-based Klas Film, is producing.

Luna Park - Florenc Papas (Albania)
After finalising his debut feature film, Open Door [+see also:
film review
trailer
interview: Florenc Papas
film profile], Albanian writer-director Florenc Papas has presented his sophomore film project, Luna Park. The drama, which is inspired by Papas’ own childhood memories, portrays an Albanian family in the 1990s, as they struggle to endure life’s hardships during a national outbreak of pure anarchy. It is being produced by Dritan Huqi, of Tirana’s On Film Production.

Honey Bunny - Igor Jelinović (Croatia)
Young Croatian director-scriptwriter Igor Jelinović has directed three short and medium-length films, and is now getting to grips with his debut feature, Honey Bunny. Set in Split, the family drama follows the rich and successful Anita, who persuades her sick mother to transfer ownership of her house to her behind her sister Alin’s back, even though she and her family are struggling financially. Anita will soon start to feel guilty about her actions and will try to keep the family bonds intact before Alin finds out about her plans. The film is being produced by Rea Rajčić for Eclectica.