26/03/2019 - Inés de León’s debut feature is a frenetic affair, packed with quick-fire dialogue and goofy scenarios, which sets itself up as a satire on the romantic comedy

Leticia Dolera and Javier Rey in Get Her... If You Can

I can’t deny that I was excited to hear that Inés de León had stepped behind the camera to direct her first full-length film, entitled Get Her... If You Can [+see also:
trailer
film profile] and up for a string of awards at the 22nd Malaga Spanish Film Festival. My enthusiasm stemmed from my first experience of her work as an actress, director and scriptwriter, a few years ago now, when I came across her micro-theatre piece, La hermana prometida, in which de León starred alongside another red-headed comedian, Daniel Pérez Prada (who, in a very different guise, appeared recently in 70 Big Ones [+see also:
film review
trailer
interview: Koldo Serra
film profile]). The pair played a brother and sister who discover, during a party to celebrate her engagement to a bombastic politician and after certain euphoric substances have been consumed, that the would-be groom is living a double life. The play is barely 15 minutes long, but it was a marvel of concision, alacrity, wit, humour and political incorrectness — the elected official outed at the end of the evening was none other than the then-president of the Spanish government, Mariano Rajoy.

There’s been a lot of water under the bridge since then, and in the interval Inés de León has kept herself occupied with short films, TV series and advertising spots for the fashion industry. Now, she has taken on the big screen with a film backed — and, indeed, commissioned — by actor, director and producer Santiago Segura. The end result is a film that shows glimmers of the freshness, energy and chutzpah of the brazen and hilarious artist I first encountered, but is let down by a flimsy script, written by Astrid Gil-Cazares with support from Rafa Russo, Breixo Corral and Pablo Álen. Ultimately, it fails to live up to the potential suggested by that irreverent and uproarious youthful caper.

Get Her... If You Can, featuring dialogue laden with glib jokes at the expense of “millennials”, begins by introducing us to three filthy rich siblings, played by Javier Rey, Amaia Salamanca and, again, Daniel Pérez Prada. They are the heirs and majority shareholders of a shipping company, and all significant business decisions must be taken by majority vote. Two of the three are deadlocked by an explosive clash of personalities and management styles, forcing each to attempt to “buy” the third vote in order to get their way — a gambit in which Leticia Dolera’s character comes to occupy a pivotal position. This is the central premise of a madcap plot that, on the pretext of parodying the formulaic Hollywood romantic comedy, rehashes its most well-worn clichés: opposites who eventually attract, the gay best friend and a gender war waged in a glossy and privileged bubble.

Although warmly received by the always-congenial audience at Malaga, Get Her... If You Can ends up dishing out a succession of sequences whacked together at full tilt, misfiring as it offers up its overwrought and rather facile screwball antics. The plot holds few surprises and takes some narrative shortcuts that stretch the suspension of disbelief a little too far. It’s a pity, because Inés de León deserves to have made a more commanding entrance into the world of film. with a story as striking, original and witty as La hermana prometida — which, short but sweet, left a deep and lasting impression.

Get Her... If You Can, filmed in various locations in Gran Canaria and Madrid, was produced by Ajedrez para tres A.I.E., Bowfinger Pictures and Movistar+, in association with Alwin Films and Cindy Teperman and with support from the ICAA and the Community of Madrid. It is due to be released in Spain on 29 March 2019, distributed by A Contracorriente Films. Argentinian company FilmSharks is handling international sales.

Inés de León’s debut feature is a frenetic affair, packed with quick-fire dialogue and goofy scenarios, which sets itself up as a satire on the romantic comedy

Inés de León makes her feature-length debut with Get Her... If You Can

The actress, screenwriter and short filmmaker is debuting in the world of features with a romantic comedy starring Leticia Dolera, Amaia Salamanca and Javier Rey 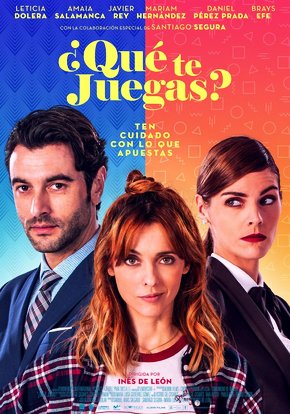