From Marseille to Tahiti, and from the unspoiled beaches of Polynesia to the museums of the great American metropolises… This journey between the chaotic western world and a distant, ancestral Eden - a return trip, as it turns out – is at the heart of the story in Gauguin a Tahiti. Il paradiso perduto [+see also:
trailer
film profile]. This new docufilm is set to be screened in Italian cinemas as a special event on 25, 26 and 27 March, as part of the Nexo Digital series, “La Grande Arte al Cinema”. Directed by Claudio Poli (the man behind Hitler Versus Picasso – The Nazi Obsession for Art [+see also:
trailer
film profile], which won the Nastro d'Argento DOC 2019 for Best Art Event Movie), Gauguin a Tahiti is based on a story by art historian Marco Goldin and Matteo Moneta (the latter also responsible for the script). The film is narrated by Adriano Giannini (Emma [+see also:
film review
trailer
film profile], currently hard at work on the set of the new Nanni Moretti movie – see our news article) and retraces the career of the French “rebel” painter, Paul Gauguin, an artist who, in 1891 and at the age of 43, left everything behind to move to Polynesia, a world away from civilisation as he knew it, following his primitive inspiration.

“We all dream of jumping on a boat and sailing off to other lands. That’s exactly what he did, that’s why he’s so loved”, art historian Caroline Boyle-Turner rightly tell us, just one of a great number of international experts, museum curators and university professors featuring in the film. Gauguin’s escape from Paris and from the artistic fashions of the time (primarily Impressionism) towards the rugged and wild Brittany coast is just the first leg of a journey which will later see him set sail towards the unknown and arrive in the Tropics after two months of navigation, where he will remain, almost without interval, until his death. The indisputable appeal of his personal story - a radical escape from the modern world and from conformism - is augmented by footage of the places where Gauguin lived out his Polynesian years, and by readings from passages which he himself wrote; letters to friends and family where statements such as “When there is freedom, what is the importance of glory?” or “I am strong because I do what I feel I should do in my body and in my soul”, among many, many others, evoke possibilities of alternative lives which each of us can easily fantasise over.

And then, of course, there’s his art, which was so utterly different from everything else in circulation at that time. His paintings, which are now housed in museums spanning New York, Chicago, Washington and Boston, offer modern viewers a little corner of paradise in the midst of the chaos of urban life; a privilege which is denied to Polynesian audiences. Indeed, the authors of the film are quick to underline the paradox: not a single canvas from Gauguin’s collection remains in Tahiti, so much so that a great-granddaughter of the painter, interviewed in situ, reveals that she’s never actually seen the work of her illustrious ancestor. Instead, she discovers his paintings for the first time, right before our very eyes, admiring them in photographic form.

With music courtesy of the composer and pianist Remo Anzovino, Gauguin a Tahiti is produced by 3D Produzioni and Nexo Digital, with the support of Intesa Sanpaolo, and will be distributed across 360 cinemas. The film has been sold in 38 countries around the world (15 of which have already a release date set between the end of March and the end of October 2019) as part of an innovative and successful initiative (read our interview with Nexo CEO, Franco di Sarro), and talks are currently underway with another 16 countries. Other art films in the 2019 diary are The Prado Museum – A Collection of Wonders (15, 16, 17 April), Exhibition on Screen – Young Picasso (6, 7, 8 May) and Dentro Caravaggio (27, 28, 29 May).

Review: The Prado Museum. A Collection of Wonders

Jeremy Irons guides viewers through the rooms of the Madrid museum devoted to Goya, El Greco, Titian and Bosch in this documentary, screened as a special event in Italy ahead of its worldwide release 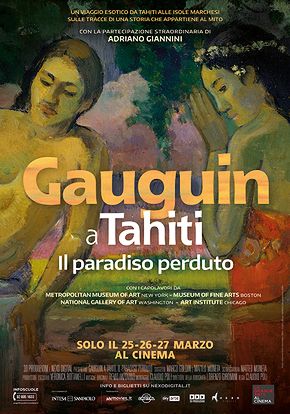