18/04/2019 - Leonardo D'Agostini’s debut film starring Stefano Accorsi and Andrea Carpenzano is a compelling story about friendship set in the world of professional, millionaire footballers in Italy

Stefano Accorsi and Andrea Carpenzano in The Champion

Since his director-producer friend Matteo Rovere first invited him to star in The Champion [+see also:
trailer
interview: Leonardo D’Agostini
film profile], Stefano Accorsi has undergone some kind of cinematographic catharsis, evolving from a drug-addicted, once-brilliant rally driver in Italian Race [+see also:
film review
trailer
interview: Matilda De Angelis
interview: Matteo Rovere
film profile] into a calm and quiet, velvet-jacket-wearing history teacher. The transformation is such that in one scene of the film, when he casually finds himself behind the wheel of one of the Lamborghinis belonging to the rich and temperamental football champion in question (Andrea Carpenzano), he presses his foot to the accelerator in a sublime moment of ecstasy, a world away from his usual Fiat Multipla experience.

Although newcomer Leonardo D'Agostini’s directorial style is lacking in any real drive, The Champion nevertheless hits the mark. It’s a canny production which delivers a moral lesson, mixing the two perfectly and blending the spectacular with the intimate. But above all, it makes full use of the extraordinary talent of lead actor, Andrea Carpenzano (who already made a name for himself last year, with his intense performance in Boys Cry [+see also:
film review
trailer
interview: Damiano and Fabio D’Innocenzo
film profile] by the D’Innocenzo brothers), who is “used” expertly by his accomplished colleague, Accorsi.

Carpenzano is Christian Ferro, a very young striker for Roma with the talent of Cristiano Ronaldo, who was born into an outlying area of the city once considered to be as run down as the Roman Trullo district. For this reason, he’s rebellious, without much time for rules (in the style of Balotelli). In the first sequences of the film, his friends put him to the test, accusing him of having “cleaned himself up”, and in order to show them he’s still the same as before despite his €3 million per annum income, the publicity which surrounds him and the sponsorship deals he enjoys, he runs away without paying for the expensive clothes he was trying on in a boutique. It’s the latest in a long line of stunts and the team chairman (Massimo Popolizio) is forced to find a solution to bring the player back in line. After a series of “auditions” with various tutors who would be tasked with preparing Christian for his final high-school exam, the chairman hires the learned and ever frowning teacher, Valerio Fioretti, who knows nothing about football nor the big business associated with that particular world, and who has never even heard of the young champion idolised by fans. In this respect, the emerging screenwriters (Giulia Steigerwalt and Antonella Lattanzi, alongside the director) have employed the classic technique of placing two diametrically opposed characters side by side. The teacher with all his money worries, having separated from his wife (Anita Caprioli) after a devastating row, tries to get through to his ultra-ignorant student who lives in a villa with Ferraris and Lamborghinis parked out front, and is surrounded by an entourage of friends/parasites permanently glued to videogames, a girlfriend with 500,000 followers on Instagram, a scrounging father and a frenetic agent (Mario Sgueglia). The teacher has no time for all this and as he observes the striker’s strategic thinking and ability to read the game, he finds a way of teaching him about World War I and about what really counts in life. Also on hand to bring the boy back down to earth is Alessia (the promising Ludovica Martino), who is similarly immune to the fame and riches of the footballer. She too grew up in the outskirts of the city alongside Christian and is paying her way through school by re-stocking vending machines at the Roma team’s training ground.

Produced by Matteo Rovere and Sydney Sibilia with Groenlandia and RAI Cinema, in association with 3 Marys Entertainment, the film was granted permission by AS Roma to use the Club’s logo and kits, and to film inside the actual Trigoria Sports Centre, which lent a touch of authenticity to the story and the match scenes. The film is sold internationally by True Colours.

more about: The Champion

Director Leonardo D’Agostini talks to us about his first work, The Champion, world-premiered at the Lecce European Film Festival

Produced by tempesta in co-production with Tellfilm, the director’s new film has been chosen for the 72nd Berlinale’s Official Selection, within the Panorama section

The actor who won a David di Donatello award for his part in On My Skin plays the lead in Alessandro Celli’s debut film, produced by Matteo Rovere 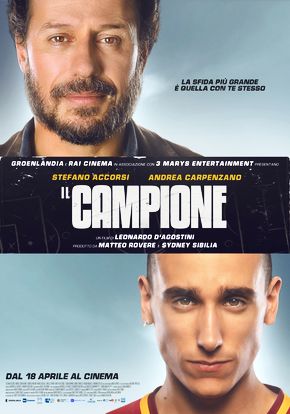 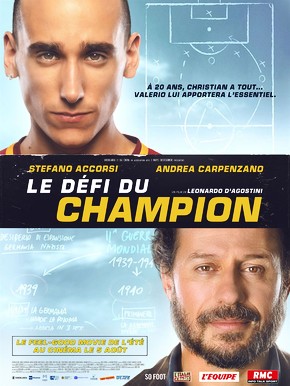 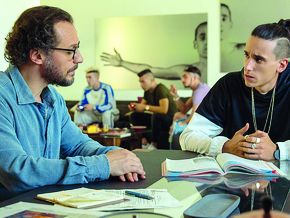 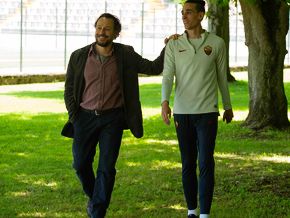