The comparison has been made countless times: the character from the Luxembourg comic, Superjhemp, who first saw the light in 1988, born out of a brilliant collaboration between Roger Leiner and Lucien Czuga, is remarkably similar to his French cousin, Superdupont. In their many adventures, these super-antiheros find themselves wrestling with a multitude of enemies emanating from their respective countries, which they look to defend at all costs. Portly and patriotic on the one hand, ultra-chauvinistic and pleasure-loving on the other, they’re popular parodies who have already seduced several generations of readers.

But Superjhemp stands out: this eminently Luxembourgian subject isn’t easily exported, imbued as it is with a blatant desire to cling to the very specific reality of the Grand duchy. And, while the memory of France’s Superdupont has faded against the likes of Astérix and Michel Vaillant, Superjhemp has become an unbeatable point of reference in Luxembourg culture.

It made sense, then, to turn the comic book into a film. When Claude Waringo, a producer at Samsa Films, first pitched the project to the director, Félix Koch, it was in the guise of a necessity: to reconnect with the country’s audiences by creating a film that would be 100% Luxembourgian; a purely local product. Three years later - following a budget of 3.5 million euros (including a considerable contribution from the Film Fund Luxembourg to the tune of 2.5 million euros), a mere 30-day shooting window and an impressive marketing campaign - the result is right on target. Currently, Superchamp Returns [+see also:
trailer
film profile] reigns supreme at the national box office. Its success in the Grand duchy has even gone so far as to outstrip that of Marvel Studios’ and Disney’ superhero offerings (Avengers: Infinity War and The Incredibles 2 respectively). As if that wasn’t enough, it’s now the most popular Luxembourg language film in the country’s history!

The comedian André Jung, who is most often seen on German TV, has bagged the role of the unlikely superhero, who’s aged a few years since appearing as the original comic book character. In the film, Superjhemp returns after a few years’ absence following the theft of the Crown destined to be worn by "the Little Duke, Luke"; an event which has rocked the "Luxusbuerg" monarchy. Beneath the mask of the superhuman in question, we find a disillusioned senior civil servant working at the "Ministry for Unresolved Issues" who no longer believes in a great deal. His wife (Désirée Nosbusch), who’s a perfect, melancholic Lois Lane, knows nothing of her husband’s past. With the theft of the Crown, her memories of her supernatural lover from times gone by are suddenly reawakened. The leaders of the Grand duchy are equally desperate for the return of their hero and make demands to this effect. It’s as good a time as any for Superjhemp to make his comeback.

Félix Koch’s film is a playing field which is packed full of allusions to real-life Luxembourg. Jean-Claude Juncker, who was the country’s Prime Minister for 18 years and who originally featured in the comic book, has been replaced here by a certain "Bretelle" (Jules Werner), a thinly veiled reference to the incumbent, Xavier Bettel. RTL, Luxembourg’s media flagship, becomes "RTHELL", while the emblematic monuments of the capital form the backdrop for this superhero serenade, starting with the Grand Ducal Palace, a place of national convergence at times of crisis (the filmmaker incorporated real crowd footage into the movie, taken during the wedding of Hereditary Grand Duke, Prince Guillaume, in 2012). The "Dräi Eechelen" (literally, "three acorns") adorning the towers of Fort Thüngen, meanwhile, serve to neutralise the terrorist pursued by Superjhemp. As ever, the latter takes to the skies immediately upon eating “cancoillote”, a traditional runny cheese which harbours a strange power...

In short, the main strength of this film - an accumulation of wackiness bolstered by a myriad of visual effects – is self-derision. It’s a Luxembourgian form of irony through and through, but it will appeal to a great number of viewers; ex pats, in particular (who account for 48% of the population), will recognise their adoptive land in its frames. It’s a well-executed second-degree effort which we definitely haven’t heard the last of. 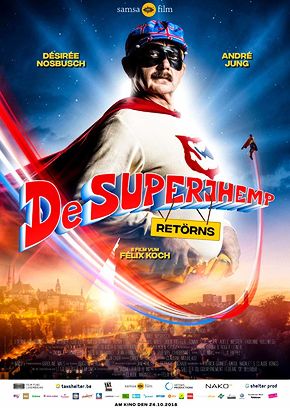 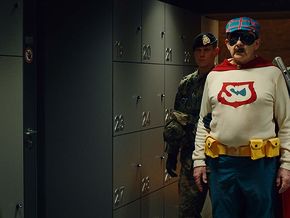 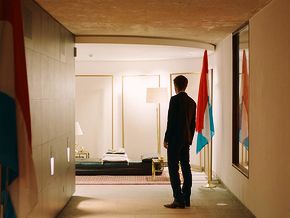 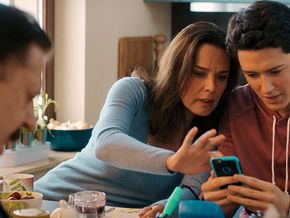 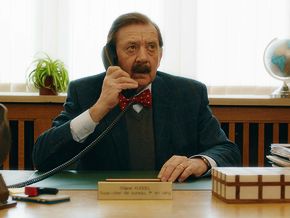 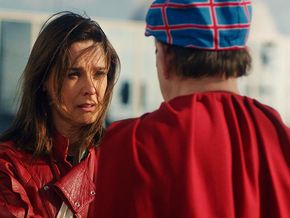 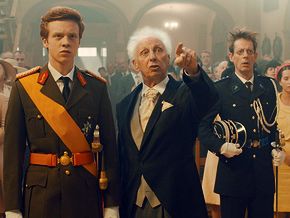