09/05/2019 - Scottish filmmaker Scott Graham's third feature is a story about parents watching children repeat their mistakes, and the conflict between adolescent freedom and adult responsibilities

These are Finnie (Mark Stanley, from Euphoria [+see also:
film review
trailer
film profile] and Ready Player One) and Katie (Amy Manson, from T2 Trainspotting [+see also:
film review
trailer
interview: Danny Boyle
film profile]), a married couple in their late thirties living in a small Scottish coastal town. Finnie works at the fish factory, together with his elder son Kid (Anders Hayward), and at home they also have a younger son, Stevie.

At the beginning, Kid gets fired from the job (which he hates anyway), despite Finnie trying to convince the boss to keep him on, as the boy's girlfriend Kelly (Marli Siu, from Anna and the Apocalypse) is pregnant. Graham treats this scene, and indeed the whole first act, in keeping with the best tradition of British kitchen-sink realism, but Run is not just a film about social circumstances. Rather, it is a treatise on wanting to run away from boredom and a limited, small-town existence, but never actually doing it, and how parents' lives and mistakes are subsequently replicated by their children. Moreover, it is about how the parents perceive themselves through the choices their offspring make.

Similarly to the world of Springsteen's songs, in small-town Scotland, youngsters get their kicks from racing their pimped-up, mid-range cars. Finnie, it transpires, used to be one of the street-racing heroes. After a difficult evening when he manages to get into an argument with all of the members of his family, Finnie gets into Kid's car and takes it for a ride. On the way, he picks up Kelly, and the unlikely pair will spend almost the whole night together, driving around and racing.

It is not easy to make an engaging film with such a bleak set-up, especially when its central part is limited to two characters sitting in a car on a dark, rainy night. Graham pulls this off through a well-planned and -edited sequence of creatively lit shots, and a rich sound design that incorporates traffic noises, snippets of songs from other cars and, in a particularly effective scene, the waves crashing against the harbour.

All of the elements needed for Graham to get his point across are there. Finnie's state of feeling nostalgia for the past but also being painfully aware of being shackled by it, exacerbated by seeing his son grow up to become exactly the same person as him, is presented in a clear and convincing manner. However, the film as a whole leaves an impression of a well thought-out draft, rather than a complete cinematic work. As there can hardly be much of a plot in such a stripped-down approach to the subject, Graham relies on details, atmosphere and the actors’ performances. All of these aspects work, but something is missing in order for the viewer to be able to fully relate to the characters. Maybe a more ambitious plot would have given the heroes more opportunities to show their human qualities and flaws, and the audience more to engage with. As things stand, Finnie and Katie – and, in future, Kid and Kelly as well – are just good people who have never lived up to their belief that they were born to run.

Run is a co-production by London-based bard entertainments and Glasgow’s barry crear. The UK's Film Constellation handles the international rights.

Scottish filmmaker Scott Graham's third feature is a story about parents watching children repeat their mistakes, and the conflict between adolescent freedom and adult responsibilities 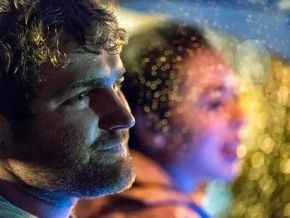