Review: Nomad: In the Footsteps of Bruce Chatwin

Nomad: In the Footsteps of Bruce Chatwin [+see also:
trailer
film profile], the third new feature that Werner Herzog has premiered in the space of under 12 months, finds the German film luminary back in energetic form. This documentary, set to air on UK TV later this year, is a portrait of Herzog’s late friend, pioneering British travel writer Bruce Chatwin, who died from AIDS-related causes in 1989. In spite of the film’s recondite British focus, Herzog enthusiasts should not miss this, as it doubles as a revealing shadow-portrait of his own career. The film premiered in April at the Tribeca Film Festival in New York City, and had its European bow this week at the Sheffield Doc/Fest. Herzog himself was present for a Q&A, and a master class the following day.

Chatwin passed away at the height of his fame, as a genuine literary celebrity with a number of bestsellers (such as In Patagonia and The Songlines) in his oeuvre. His work has become a bit unfashionable, although this documentary should win him new admirers, as his concerns translate so well to cinema. He was an old-fashioned adventurer and swashbuckler, with a more Edwardian temperament that put him at odds with a bleak post-war Britain. His passion was what he called “secret knowledge”: he unveiled the mysterious aboriginal “songlines” of the Australian outback, traversed Patagonian caves in search of rare fossils and travelled vast plains mainly on foot, like the nomadic peoples he so identified with. More recently, claims of falsehood in his discoveries began to chip away at his reputation. Truth was a more malleable thing for Chatwin, not wanting to impair his poetic eye.

Herzog, of course, has a similar ardour for “ecstatic truth”, and Nomad proceeds as a perfect hybrid of their two sensibilities. Divided into chapters that focus on each of Chatwin’s major works, the film follows Herzog on his own quixotic journey as he travels to the locales featured in each book. The initial spark of In Patagonia was Chatwin returning to the discoveries of his older cousin Charles Amherst Milward, another rakish adventurer. Herzog cuts to Milward’s palatial house in a montage and, in a voiceover, describes it as “extremely ugly”. And the tone of this eccentric and spirited film only gets more irreverent from here. In the Q&A, Herzog confessed to having some mild concerns over what he’d turned in to the BBC, and Nomad brilliantly punctures the over-stately tone that arts documentaries of this type can succumb to.

There’s also a sense that Herzog has been re-energised by material closer to his heart. Past films this decade, such as Queen of the Desert and Lo and Behold, Reveries of the Connected World, found the director struggling to completely absorb their subject matter (the diplomat Gertrude Bell, and the foundations of the internet) into his fluent film style. Chatwin, conversely, is like a spiritual sibling: Herzog’s first German films shaped Chatwin’s curiosity about the world, and Herzog returned the favour, adapting one of his novels in Cobra Verde, his last collaboration with notoriously difficult actor Klaus Kinski. The film’s key visual symbol is Chatwin’s small traveller’s backpack, bequeathed to Herzog after his death. Almost like the two leads of Ingmar Bergman’s Persona, Nomad documents two souls merging in communion.

Nomad: In the Footsteps of Bruce Chatwin is a UK production. It was produced by Lucki Stipec and Steve O’Hagan for BBC Two and Arena. The executive producer for BBC Studios is Richard Bright. British firm Sideways Film holds the world sales rights.

more about: Nomad: In the Footsteps of Bruce Chatwin

Review: Nomad: In the Footsteps of Bruce Chatwin 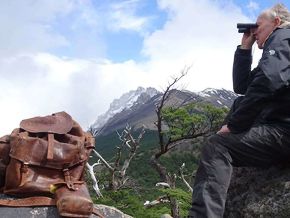