13/06/2019 - Nick Broomfield tackles the relationship between Leonard Cohen and Marianne Ihlen in this heartfelt, touching and romantic documentary

Nick Broomfield loves a music documentary that features warring personalities. Just watch Biggie and Tupac, Kurt and Courtney, or his recent effort Whitney: Can I Be Me [+see also:
trailer
film profile], in which Whitney Houston battled mainly with herself. Each of these films relied upon a sensational new angle that the documentarian attempted to unveil, with varying levels of success. So it’s refreshing that the British director has taken a softer, more detached approach with Marianne & Leonard: Words of Love [+see also:
trailer
film profile], which details the romance and relationship between singer-songwriter Leonard Cohen and his Norwegian muse Marianne Ihlen, and which is playing at the Sheffield Documentary Film Festival before going on general release in the UK in July. It seems that when Broomfield knows the protagonists personally, he himself can adopt a more gentle and understanding approach, even downplaying his own position in the story, as early on in this fascinating documentary, he acknowledges that he was a former lover of Ihlen and became her lifelong friend. Indeed, it was Ihlen who convinced Broomfield to make his first movie, Who Cares?, an 18-minute flick about slum clearance in Liverpool in 1971.

Mixing archive footage with talking heads, and also making use of various interviews that Cohen and Ihlen had given during the course of their lives before they died within three months of each other in 2016, Broomfield uses the relationship of the couple to tell the story of artists and their muses, the artistic community on the island of Hydra in the 1960s, and a world of free love, drugs and music. The tone of the movie is as soulful and as heartfelt as one of Cohen’s ballads, and the lyrics of his classic track “So Long, Marianne” haunt this film, as Broomfield uses various different performances of the song by Cohen to show how it was impossible for him to escape his muse, even after she had returned to Norway and their romantic relationship had ended.

Broomfield has huge amounts of sympathy for Ihlen, who was a single mother by the time she met Cohen in Greece in 1960. After some hugely happy times, Ihlen became the forgotten woman who tried to keep their fracturing relationship together whilst Cohen discovered his musical prowess and became a superstar in New York. Cohen, for his part, suffered from depression and struggled to give himself wholly to one person, preferring the solace of open relationships and losing himself in the sound of a pen scratching along the page. He had a breakdown after writing an incomprehensible novel and enduring a yearlong battle to overcome stage fright. It’s to the benefit of the film that Broomfield doesn’t try his usual tactic of psychoanalysing his protagonists, leaving it up to the audience to decide what made Cohen run and Ihlen stay. Through several illuminating interviews, shot as talking heads, Broomfield also paints a picture of the time, the free love of the 1960s, the indulgence of artistic talent and the suffering of children.

Cohen and Ihlen remained lifelong friends, and Broomfield details some of the singer’s travails in later years, including the embezzlement of his money by his manager. It ends with a poetic letter, which just goes to show how so many of the best romantic tales are imbued with tragedy. 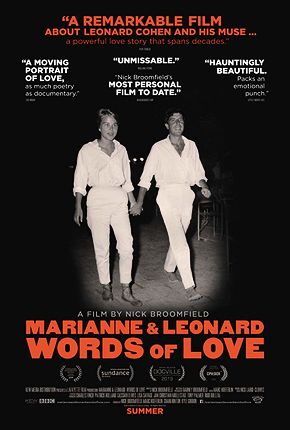 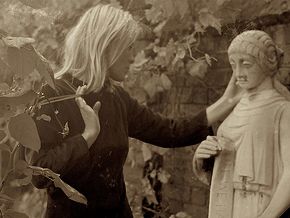