In his latest documentary, Batastories [+see also:
trailer
film profile], which premiered in the Slovak Season section of the Art Film Fest in Košice, Slovak director Peter Kerekes unpacks the success story of the Bata shoe company. Similar to Kerekes’ previous works 66 Seasons and Cooking History, which centre on stories of a Slovak swimming pool and field kitchens around the world, respectively, Batastories interweaves several storylines from around the globe and from different decades, with the footwear remaining at its core.

Starting off with the biographical aspect of the story, Kerekes traces the early life and career of factory founder Tomáš Baťa, his heir and son Thomas J Baťa as well as his half-brother and successor Jan Antonín Baťa. The three protagonists come from a Czech family of cobblers going back several generations. With the use of old video footage and photos, the film recounts how the Baťas set out to build a shoe empire in the city of Zlín, before becoming pioneers in globalisation and mass production.

Adding complexity to the montage of historical footage is a voice-over that gives an insight into Baťa’s diary, emphasising his ambitions not only for creating a global brand, but also for constructing a modern infrastructure around the factories, changing the architectural face of the cities his company expanded into because of his love of functionalism. “I had no choice; I had to become hated,” reads the diary, echoing his vision of running a strict regime, as he assumed that this was the only approach that could provide continuous excellence and social comfort.

Given the length of time the movie spends on unfurling a multi-layered portrayal of the founder himself, his brother and son, on the contrary, are only quickly touched upon. Jan Antonín is primarily a checklist of entrepreneurial accomplishments with some additional comment by his granddaughter, whereas Thomas J is merely an epilogue in the arc of the company’s history, as presented in the movie.

While the interviews with Tomáš Baťa’s and Jan Antonín’s grandchildren add a personal element to the biographies, the testimonies of current and former Bata employees serve to usher in the second focus of the documentary. It showcases the factories and the accompanying infrastructure that the Baťas built around the world, and the impact they have on demographic and social structures to this day. The film jumps between various locations in India, Kenya, Brazil, France and the Czech Republic, emphasising the similarity between them and marvelling at the Baťa legacy.

It is in trying to capture the accomplishments of Bata shoes in an international context that the documentary sometimes finds itself on shaky ground. Instead of solemnly focusing on the impact that Bata had on the communities, it tries to draw parallels between the life of a well-off Czech shoemaker and contemporary workers from less developed regions of the world. “His shoe changed my life,” a passionate employee declares, swinging the pendulum of the narrative further into PR territory, rather than maintaining a professional distance. This is further substantiated by the understated aspects of, for example, felling trees in the untouched Brazilian jungle to build factories and being one of the first companies to embrace the more aggressive aspects of globalisation.

Batastories is a well-constructed history lesson for those unfamiliar with the fascinating story of the former Czech (now Canadian-owned) shoe empire. In the end, however, it shies away from engaging in a profound dispute with the company’s legacy, instead playing a tune of unanimous praise.

Batastories is a Slovak-Czech-French collaboration. It was produced by France’s Seppia, and co-produced by Peter Kerekes Film, Negativ Film Productions, Czech Television and ARTE France Cinéma. 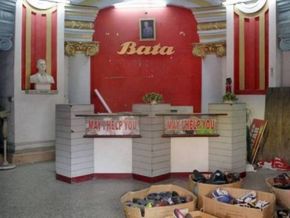