Is Slovak society ready for the unconventional love between a Romany woman and a handicapped Slovak? The screenwriting and directorial debut by father-son duo Víťo and Richard Staviarsky seeks the answer to that in their film Loli Paradička [+see also:
trailer
interview: Marka Staviarska
film profile], which premiered to a full house in the Slovak Season section of the Art Film Fest in Košice. The movie, however, doesn’t necessarily present an answer to this question, but rather raises its own.

Is the Staviarsky duo itself actually ready to deal with such a romantic scenario? Instead of presenting a sad-yet-funny tale of complicated love, the movie thrives on cheap jokes and corny plotting, with ethnic minorities and women bearing the brunt of serving as comic relief.

The film recounts the story of one-legged Milan (Michal Iľkanin), a Slovak man selling goods at street markets and living with his mother, and Veronika (Kamilka Mitrášová), a Romany woman who has left home in order not to be forced into marriage. They meet at a street market where Veronika – naturally, it would seem – tries to steal earrings from Milan’s stall. But grumpy old Milan takes pity on her and decides to buy her some food, a move that seems to unlock the door to a Romany woman’s heart, as he is unable to get rid of her for the rest of the running time. But that’s okay, since the film presents the argument that they fall in love somewhere along the line. The viewer has to take this as a given, as we never see the couple getting intimate or even kissing, as the screen conveniently fades to black right beforehand.

All of these points could be written off as being due to a weak beginner’s script, but there is more to take issue with in this movie. The story unfolds in a reality that caters to a heteronormative white audience that is still laughing at racist and misogynistic jokes. Veronika is a shallow, silly woman whose only salient characteristics are looking pretty and repeatedly seducing Milan in a husky, porn-star voice. “Doesn’t this look like a wedding dress?” she asks him, wrapped in a white curtain, the evening after they first meet, promptly followed by a “We should sleep naked!”

Milan’s sole purpose is to steer clear of his doomed destiny as a bachelor. His handicapped status and current living conditions make him less of a heteronormative man, meaning that he is not masculine enough to get a “real woman”. He tells his mother this exact same thing when she complains that he should get a proper girlfriend. The viewer is left wondering whether Veronika is simply a consolation prize or an object of true love. Milan is offered the chance to repeatedly play the role of her white saviour, thus giving him the opportunity to regain his manhood.

This includes preventing assaults triggered by her flirty behaviour, encouraging her to get a makeover and giving her a job. “Isn’t this better than stealing?” he asks her, betraying the perspective of the Staviarsky script and its view that Romany people always have options. Veronika starts shedding her identity, cuts her unusual-looking hair and stops wearing lipstick. She turns into a compliant woman who stands in stark contrast with her own people, who are still being portrayed as rather shady.

But the Romany people aren’t the only ones getting their share of digs. Milan’s friend declares that after an embarrassing mix-up where a Vietnamese man was mistaken for a Chinese man, he reckons he can tell the difference now: the Chinese are “more yellow in the face”. If this and all the other slurs were placed in a context where they weren’t played straight, but rather with the aim of being revealing about a society or an ideology, they might work. But for the Staviarsky duo, they are just convenient comic relief. In the end, the movie is not a discourse on overcoming archetypes and finding love, but rather embraces outdated stereotypes.

Loli Paradička is a Slovak production by Staviarsky and Radio and Television Slovakia. It is being distributed by Forum Film.

Cineuropa talked to Marka Staviarska, the Slovakian producer of the low-budget dramedy Loli Paradička, about how it became a surprise domestic box-office hit

The tenth edition of the Slovakian national film awards shone a spotlight on the domestic film industry, while Marko Škop's movie walked away with five trophies

The Colombian co-production Monos received the Blue Angel for Best Film, while Best Director went to Jonah Hill for his US indie flick Mid90s; further awards went to Austria, Russia and France 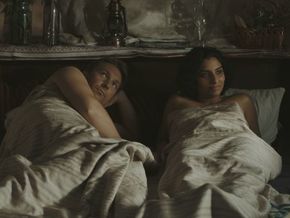