KARLOVY VARY 2019 Out of Competition

Feeling like a much simpler remake of Atom Egoyan’s not entirely successful geriatric thriller with a twist Remember [+see also:
film review
trailer
film profile], which saw Christopher Plummer and Martin Landau going after a former Nazi responsible for the death of their families while battling dementia, Martin Dušek and Ondřej Provazník’s Old-Timers [+see also:
trailer
interview: Martin Dušek, Ondřej Provaz…
film profile] is a much more likeable proposition. That’s mostly because of its two protagonists’ truly impressive level of grumpiness, easily topping even that of Lemmon and Matthau in Donald Petrie’s Grumpy Old Men. It’s just a shame that their angry mumbling, livening up Karlovy Vary’s Out of Competition section this year, is not rewarded with juicy lines similar to the ones that those other two codgers got to enjoy delivering in Petrie’s comedy, such as “I have laid more pipe in this town than Wabasha Plumbing” or “When I had an ulcer, I was farting razor blades.” Now that was a good movie.

Still, there is plenty to enjoy here, although “enjoy” might not be the best word, as Old-Timers, even though occasionally chuckle-worthy, is far from a celebratory revenge story with geezers brandishing guns as they go merrily on their way to right old wrongs and make the 60-plus demographic feel very good about themselves. The story of Tonda and Vlasta (Ladislav Mrkvička and Jiří Schmitzer, looking like a dried-up John Waters, which should be taken as the highest possible compliment), on their way to finally get a communist prosecutor who, instead of paying for what he did one day, just “took a tram home from the court”, is actually surprisingly sombre. With their tragic past as political prisoners only really implied and yet perfectly clear, it seems that wrinkles can’t cover up all of the wounds, and sometimes they just want some damned satisfaction. But right from the start, you get the feeling that whatever the outcome, that sentiment will just escape them again, as no matter how many guns one attempts to smuggle through customs, one will never get those years back.

These actors, as – hate this expression – seasoned as it gets and both really fantastic, make you feel all the pain, be it in their legs, their hearts or their heads. Playing the innocent-retiree card when needed and yet still referring to a beloved dog as “an old slut”, they just trundle along, with both directors staring right at their tired bodies, struggles with even the simplest of movements and wheelchair manoeuvres that the rest of the world would rather not see. “To hell with the fucking Czech Republic!” one of them yells out, and it’s unclear whether he is referring to his past or his present, both seemingly spent pretty much on his own, accompanied only by the memories eating away at him from inside. With their bitter remarks and surprising fondness for Hawaiian leis, it’s an uncomfortable yet involving ride, with only the clunky ending betraying the helmers’ lack of experience. With performances that strong, you would have hoped for a better send-off, but at least Dušek and Provazník provide you with words of wisdom to cherish: you can’t piss all over the truth.

Written by Martin Dušek and Ondřej Provazník, Old-Timers was produced by Jiří Konečný, of Czech outfit Endorfilm. It was co-produced by Czech Television and Slovakia’s Sentimentalfilm, and backed by Eurimages.

"The story is not only Czech, and not only about communism - it could happen anywhere and anytime"

Martin Dušek and Ondřej Provazník, the Czech directing duo behind Old-Timers, shown out of competition at Karlovy Vary, discuss their film with us

Let There Be Light shines at Finále Plzeň

The 33rd edition of the Pilsen-based festival has wrapped, awarding the best domestically produced oeuvres in the process

The Painted Bird soars at the Czech Lion Awards

The revenge road-dramedy has won three awards, while the chamber comedy Owners followed close behind

2019 was another record-breaking year for Czech movie theatres, and the charts were topped by a home-grown rom-com 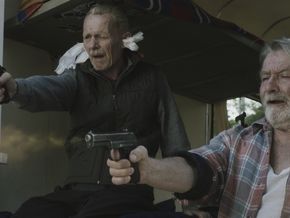 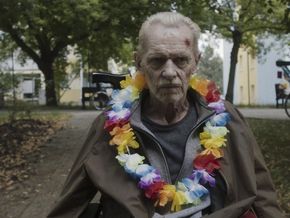