Logan Lerman and John Hawkes in End of Sentence

Part of the European Perspectives strand at the recent Edinburgh International Film Festival, End of Sentence [+see also:
trailer
film profile], the debut feature by Icelandic producer-turned-director Elfar Adalsteins, is going to win no prizes for originality in storytelling, as the movie follows a classic route with its narrative written by Michael Armbruster. Instead of focusing on the story, it relies on strong central performances from John Hawkes and Logan Lerman as an American father and son on a road trip, during which cinematographer Karl Oskarsson’s lensing takes full advantage of the Irish backdrop to give a wistful sentimentality to the proceedings.

Following a well-planned road map, father Frank goes to meet his estranged son Sean on the day he’s released from jail and tells him that they have to overlook their differences, as Sean’s mother’s dying wish was for them to cross the Atlantic and scatter her ashes in a lake where she grew up. It is there where all her secrets are to be found, and where damaging rifts can be healed. There is a lot of huffing and puffing, mutual animosity and several twists and turns, all recounted with a laudable restraint and a melancholy in the pacing and aesthetics that matches Frank’s emotional state. As first films go, it’s an extremely competent road test, which will sit well on the filmmakers’ CVs because the only car crash happens on screen. But do we really need yet another tale of male bonding on the road? The answer is… maybe, especially in a movie that tries to delve into the cycle of behaviour that stems from patterns learned in the home.

Despite the dead mother, it’s not entirely without a feminine touch. After a particularly drunken wake in Dublin, Sean meets feisty singer Jewel (Sarah Bolger), the only character with the drive to get what she wants, and embarks on a fateful love affair with her, where his skills as a car thief come in handy and we start getting an insight into Sean’s vulnerability and the antagonism that has existed between fathers and sons throughout the generations of the Fogle family.

End of Sentence works best when taken as a character study of broken men. Frank is a meek, reserved entity who is passive-aggressive in his approach, trying to get his way by invoking the will of others. Sean, fresh out of prison, is antagonistic and rebellious on the outside, but a lost puppy on the inside. The filmmakers should have relied more on the fact that a newfound emotional openness would have been enough to carry the movie, because some of the plotting and twists swerve way off the road, especially as the writer and director see Jewel as their version of Alabama from True Romance, and her side story feels contrived. It seems that the men behind the movie could do with a few of Frank’s lessons in how to treat a lady themselves.

End of Sentence is an Icelandic-Irish-US co-production staged by Beserk Films in association with Sighvatsson Films, Samson Films and Rocket Science, and with the support of the Icelandic Film Centre. Its international sales are overseen by Rocket Science.

more about: End of Sentence

“I have learned the most from working with other producers” 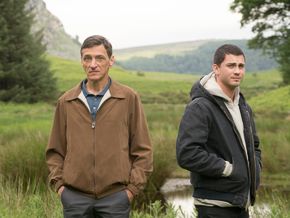