It’s the year 2035 and Tallinn has become a neon grey megacity which rarely sees the sun. Now controlled by artificial intelligence (the supercomputer Psychobook), the former capital of Estonia is attacked by the computer virus “Soviet Union”. In order to stop the creator of the virus – a man going by the name of General Stalin – the CIA assign the dreaded Operation Jungle mission to its best agents: Lieutenant Palmer Eldritch and his sidekick DT Gagano. With no introduction to this science-fiction world, no explanation of how it was that artificial intelligence came to power, and no clarification on what this computer virus ultimately means for human beings, Miguel Llansó’s second feature film, presented in competition at the 19th Neuchâtel International Fantastic Film Festival, open onto a world of chaos. Staying ever true to his own particular style, the Estonia-based Spanish filmmaker invites intrepid audiences of Jesus Shows You the Way to the Highway [+see also:
trailer
interview: Miguel Llansó
film profile] to dive into a narrative abyss leaving their parachutes behind. Indeed, from the very beginning of this frantic film, the action unfolds in the epicentre of a bizarre dystopian story which we will learn more about as the movie progresses.

Both Llansó’s first (Crumbs [+see also:
film review
trailer
film profile]) and second films are futurist road movies which begin with the image of a nigh-on anonymous hero – played, on both occasion, by the iconic Ethiopian actor Daniel Tadesse Gagano – who’s about to embark on a suicide mission. Jesus Shows You the Way to the Highway – Llansó’s first English-language film – opens in a version of Tallinn which looks a lot like Blade Runner’s Los Angeles. In this megacity, we grow familiar with the operational centre of the CIA, the apartment of DT Gagano (Tadesse) and his wife Malin (Gerda-Annette Allikas), the cabaret where the woman works and the gym where she practices kickboxing while her husband saves the world as a secret agent. But when Operation Jungle spins out of control and Tadesse’s mind falls prey to a virtual reality programme along the lines of the Wachowski sisters’ Matrix, the director transfers the story to a hypothetical Ethiopia of the future.

By delocalising the plot, Llansó reveals the afrofuturism that characterises his films, and this film in particular. Our Madrid-born director, screenwriter and producer eschews traditional science-fiction whose superheroes and baddies are invariably played by Caucasian actors. Works such as his first feature Crumbs, as well as the present film and his earlier short film launched in Locarno, Chigger Ale, not only help to break down racist prejudice within the fantasy genre; they also pay homage to the Nollywood industry, which is promoted by the geographical delocalisation in the film, and highlight the attributes of the afro hero.

Over the course of Jesus Shows You the Way to the Highway, Tadesse turns into an Ulysses of sorts who fights to escape the virtual reality programme in which his mind has become trapped so as to return to Itaca and meet the beautiful Penelope. But while he remains trapped in that strange place by the name of Betta Ethiopia, he will cross paths with imaginary characters inspired by the iconography of Nollywood B movies. Standing tall among these is the corrupt prime minister of Betta Ethiopia, Batfro (Solomon Tashe), who will soon become Tadesse’s worst enemy. And so, in order to escape the Matrix and find his wife, Tadesse must face this Afro Batman, a power-fixated and drug-obsessed kung-fu expert who’s making a secret deal with General Stalin.

Jesus Shows You the Way to the Highway is produced by Lanzadera Films, Alasti Kino and Ethiopian outfit BiraBiro Films.

more about: Jesus Shows You the Way to the Highway

Interview: Miguel Llansó • Director of Jesus Shows You the Way to the Highway

"If the preference is for something successful, rather than something risky, then we have a problem as a species"

Spamflix wraps 2019 with a flurry of new releases

The TVoD platform has secured new fantasy, experimental and animated titles for its December slate

The line-ups of the Co-Production Market, Works in Progress, POWR Baltic Stories Exchange and Script Pool Tallinn will be presented from 26-30 November 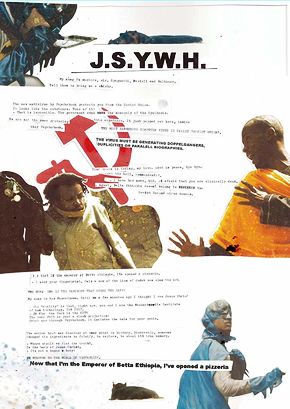 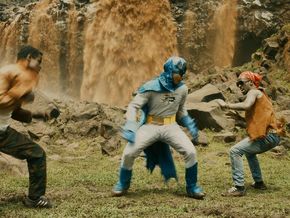 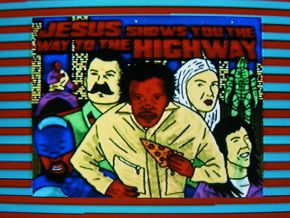