26/07/2019 - Ana Maria Rossi's debut feature strikes a satisfying balance between comedy and drama, supported by the performances of the two convincing lead actors

Yesterday, European Film Festival Palić (20-26 July) hosted the world premiere of Ana Maria Rossi's debut film, Ajvar [+see also:
trailer
interview: Ana Maria Rossi
film profile], penned by the director herself in tandem with Maja Todorović. The story is fairly simple and revolves around two themes already thoroughly explored by contemporary cinema – namely, homesickness and the lack of communication between a married couple in their forties. In detail, we follow Vida (Nataša Ninković, best known for her roles in The Trap [+see also:
trailer
film profile], The Professional, War Live and Savior) and Bane (actor and politician Sergej Trifunović), two Serbians who have been living in Stockholm for a long time and apparently enjoy a comfortable life, with stable jobs, decent wages and a friendly dog – but no children.

The opening credits show the title of the film, accompanied by an explanation of what ajvar actually is, written in the English language: it is a pepper-and-aubergine relish, very popular in the Balkan countries and, as explained by the opening titles, “commonly found in the suitcases of Serbians living abroad”.

From the very beginning, we feel that the two characters have lost interest in each other and are tired of their relationship. One of the first scenes, set in their Swedish flat, shows the two sitting at the table and having dinner, sporadically chit-chatting and not looking at each other. In many of the sequences that follow, the two are together in the same place, but the composition of the frame always reminds the viewer of the distance and the lack of affection between them, as the characters are often placed symmetrically, either in front of each other or side by side, but do not engage in any active, purposeful communication. The frequent pauses and moments of silence between Vida and Bane effectively strengthen the portrayal of this troubled couple, supported by the excellent performances by Ninković and Trifunović.

Throughout the movie, there are also some fantastic moments that have a hint of the atmosphere of Anton Chekhov's plays (particularly The Seagull), especially when the characters are smoking cigarettes together and try – more or less successfully – to say something meaningful, or disclose their fears and secrets. Nonetheless, Ajvar is not just a drama about relationship issues and the characters' frustrating married life, as the theme of homesickness is treated in a more lighthearted manner and does not make the story too melancholy. In particular, Vida's mother (veteran Vesna Čipčić) and Bane's relatives (played by Miodrag Krstović, Branka Petrić and Pavle Pekić, among others) are hilarious and enrich the flick with several funny gags.

Furthermore, in all of the scenes where the couple interact in public settings, the dialogue is lively and able to highlight the contradictions and hypocrisies inherent in our society, heavily influenced by other people's judgements and prejudice (the dinner scene with the couple's two well-off, long-time friends in the restaurant is a good example of this). The narrative does not bring any great surprises or memorable plot twists to the table, but what is interesting here is the way the characters experience their crisis and try to achieve their goals. We may be able to anticipate very quickly how the story will end, but the film still manages to generate a good deal of tension and curiosity.

In conclusion, Ana Maria Rossi's directorial debut is a notable work, which manages to strike a good balance between drama and comedy. The picture’s themes are perhaps not the most original, but the high quality of the script and cast give Ajvar a freshness and special significance.

We had the opportunity to chat with Ana Maria Rossi, the director of the Serbian-Montenegrin drama Ajvar, one of the titles selected for the main competition at the 26th European Film Festival Palić

After several successful shorts, Bakrač’s feature debut has just been selected for the East of the West competition

Other winners include You Have the Night, Monsters., Ajvar and Stitches; the Herceg Novi-based event was jointly opened by all women filmmakers present

Misho Antadze, Ladj Ly and Juris Kursietis were among the victors at this year's edition

Ana Maria Rossi's debut feature strikes a satisfying balance between comedy and drama, supported by the performances of the two convincing lead actors 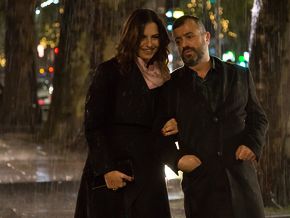