26/07/2019 - Ukrainian director Andy Iva debuts with a humanistic, if rather stagy, take on the conflict he got to experience first-hand

Besides some occasional swerves into unknown territory depicting the lives of an exceptionally tall sound recordist (My Thoughts Are Silent [+see also:
film review
trailer
film profile]) or an unfortunate cinema projectionist (Projectionist [+see also:
film review
trailer
interview: Yuriy Shylov
film profile]), this year’s National Competition at the Odesa International Film Festival also accommodated some brand-new takes on the still-fizzling political unrest. It’s very telling that two films addressing difficult issues head-on, U311 Cherkasy [+see also:
film review
trailer
interview: Tymur Yashchenko
film profile] and now Andy Iva’s Eastman [+see also:
trailer
film profile], were made by debuting directors, eager to loudly state what hasn’t been stated before and start a whole different beast of a conversation, focusing not so much on recognisable politicians or moments best known from front-page coverage, but rather ordinary people trying their best to survive – and figuring out what it is they are actually fighting for.

And ordinary they are: in Eastman, Iva brings out all of these “modest, unrecognised heroes” that Jaroslav Hašek was so fond of, here defending Ukraine’s eastern territory. They are people for whom war, at least at the beginning, is glorious only in the numerous children’s doodles pinned to the wall, wallowing in bureaucracy and plagued by a constant fight for supplies, as proven by a lengthy exchange about cigarettes, swiftly followed by loud demands for toilet paper – starting as soon as the dramatic-looking opening credits are over. But such an approach, however well-intentioned, has a familiar ring to it, with chatty characters resembling the ultimate war-movie archetypes, from a no-nonsense old dog (Bohdan Beniuk) to a clueless rookie (Anatoliy Maksimyuk), predictably paired up together to get the best of both worlds.

Beniuk has experience to spare, but whenever they are left on their own, the acting doesn’t quite cut it. Especially with the duo forced to deliver emotional monologues on a regular basis, usually while on the road (not to be petty, but it seems that it’s only in movies that people can’t wait to sit on the bonnets of their cars for no apparent reason). They are so stiff and exaggerated that one half-expects to hear a stifled cough coming from one of the rows at the back of the theatre. This is odd, given that the young director drew on his own experiences here, having fought in 2016 and cheekily referencing it in the scene when one of the “boys” asks for a film to be made about his adventures. And yet the exchanges seem less like a product of sneaky eavesdropping than a full-on invention, one that brings to mind the lines of The Good Soldier Švejk all too well but forgets its heart-breaking lightness.

There are some nice bits here, with the car driving through right after a black cat crosses the street – never a good sign – or people in the background fully dedicated to celebrating the famed “Slav squat” as if their life depended on it. But one really shouldn’t need to hear that “Donbass is a complicated thing” in order to figure it out. Still, it should be interesting to see what this new wave of war-tinged movies, looking for other ways to approach the wounds which underneath all these bandages are still far from healing, might eventually bring. This writer, for one, will be waiting.

Eastman was produced by Volodymyr Filipov, Alla Ovsiannikova, Andrii Suiarko and Oleksandr Kovalenko for Insight Media, which also handles its international sales. The movie was funded by the Ukrainian State Film Agency. 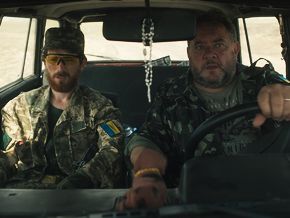