We all have certain expectations regarding the content of fiction films and documentaries on the topic of the recent refugee crisis in Europe. So much so, that "refugee cinema" is in fact more of a sub-genre than simply a label. London-based Greek filmmaker Tasos Giapoutzis does his best to defy these expectations (and the information from news reports) with his feature-length documentary debut Quiet Life [+see also:
trailer
film profile]. The film had its world premiere at this year's edition of the Thessaloniki Documentary Festival, while its international premiere took place in the Balkan Dox competition at DokuFest.

As one of the film’s rare moments of on-screen text informs us right at the start, the Greek coastal town of Kavala is located roughly 1,300 km from Damascus and 1,500 km from Berlin. It could therefore be seen as a sort of a midpoint on the Balkan route which the Syrian refugees take towards a better life, in a land they take for promised. Kavala itself is a quiet coastal town where life seems slow, especially from the point of view of the local characters or subjects, such elderly priest Anthimos, the grumpy cobbler Kostas yearning for vacation in the nearby hills, and retiree Vangelis whose quiet life is more or less silent. The question then is whether this quietness is in danger, due to the refugees passing through the town or staying for a time in the safe house of sorts operated by elderly couple Roula and Elias.

Giapoutzis' focus here is on a specific Syrian family, mother Nour and her grade-school-aged sons Jamal and Roni. The father of the family is already in Germany and sometimes communicates with them via Skype, while the trio is in a limbo of sorts, stuck between a horrific past and an uncertain future. For their part, the boys are enjoying life as much as they can, playing and learning languages, and their mother tries to provide for them the best she can. As a result, they are more affected by the place, and not necessarily in a bad way, than the place itself is affected by them.

Tasos Giapoutzis served as his own cinematographer and kept following the family from a decent distance, not too close, yet not too far, for 18 months on an on-again-off-again basis while they stayed in the aforementioned safe house. His idea was to make a positive, even somewhat cheerful, good-hearted film that is less about the refugee crisis and more about local communities in times of change, highlighting the best of examples. Given the conditions, it is refreshing to have a film that plays like a feather-light version of Gianfranco Rosi's 2016 award winner Fire at Sea [+see also:
film review
trailer
interview: Gianfranco Rosi
film profile].

On the other hand, the general feeling of the film is of something more scripted than strictly observational, since editor Marios Kleftakis also served as scriptwriter. It feels as though the director and the scriptwriter were focused on their characters, who may or may not be representative of the whole not-so-small town, and filtered out the influences or factors that did not fit with their original vision and with their story. However, from an ethical point of view, it also seems that the subjects involved willingly went along with it and had nothing against being characters in a movie. Another questionable choice is the arbitrary use of Noor’s narration to provide context, which comes too late in the film and remains superficial. Yet in the end, Quiet Life justifies its existence by justifying its title, showing a particular place in a particular time in natural colours, and sending out a signal of hope and humanity.

Quiet Life is a Greek-UK co-production realized through the company Thinking Image Films with the director serving as the only producer. It has not yet been picked for world sales. 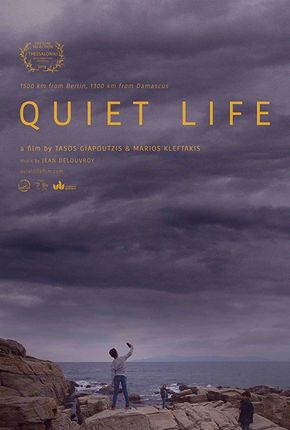