Review: Days of the Bagnold Summer

Earl Cave and Monica Dolan in Days of the Bagnold Summer

Days of the Bagnold Summer [+see also:
trailer
interview: Simon Bird
film profile], the directorial debut from British comedian Simon Bird, is an ode to suburbia: a celebration of the ordinary. The domestic un-bliss of emo teenager Daniel Bagnold (Earl Cave), forced to stay with his middle-aged mum Sue Bagnold (Monica Dolan) during summer holidays he’d planned to spend driving around Florida in his dad’s convertible MG. Looked at from another perspective, it’s the story of an introverted 52-year-old librarian struggling to get back into the dating game while her angsty son mopes around at home unable to clean the dog sick out of his shoe. Told from both perspectives – mother and son have an equal number of scenes – this Bromley-set comedy which played on the Piazza Grande at the Locarno Film Festival is finely observed.

Days of the Bagnold Summer is a movie in which people dealt a poor set of cards respond by shrugging their shoulders. More than anything, it is the tone of the film — which always stays on the right side of quirk and is full of mannerisms — that makes it a winning and not whining whimsy.

Adapted from Joff Winterhart’s graphic novel, Lisa Owens' screenplay is full of wry dialogue and irony. The whimsical and heart-warming tone of Bird's film is in tune with the soundtrack provided by Scottish stalwarts Belle & Sebastian, whose song titles Get Me Away From Here I’m Dying, We Were Never Glorious and I Don’t Feel Like Dancing are perfect descriptions of the emotional turmoil bubbling inside the central characters. The soundtrack also stands in contrast to Daniel's tastes: he wears Metallica t-shirts and wants to front a metal band, and a side-story follows his seemingly forlorn attempt to do so.

At the heart of the picture are two fine performances. Cave captures that moment of doubt which almost inevitably accompanies the journey from childhood to adulthood. His insolent and snarky nature is more a sign of indifference than rebellion. Daniel is easily hurt and can’t hide his grudges. He falls out with his best friend Ky (Elliot Speller-Gillott) and can’t hide his disappointment at having to spend time with mum.

Dolan is stunning as a conscientious mother who has accepted her lot in life but is still open to offers when they arrive, even if she takes her time to call Douglas Porter (Rob Brydon) back when he asks her on a date. She has a good support group, made up of her sister Carol (Alice Lowe) and her new-age neighbour Astrid (Tamsin Greig), who are both given freedom to exaggerate their performances because of Dolan’s mousiness. Dolan plays the happy-sad Sue as a woman who refuses to feel sorry for herself, despite everything.

It’s a strong directorial debut from Bird, best known for his role as Will McKenzie in The Inbetweeners. There is a touch of John Hughes about the way he cares so much for the have-nots, capturing moments of desire and hope which are constantly fighting with feelings of inadequacy. The rare occasions in which the action goes down a cul-de-sac is when the script tries too hard to be funny, for example, a fudge-making scene is hilarious, but far too broad when compared to the nuance and wry comedy that imbues the film’s best scenes. Thankfully, for the most part, Bird steers clear of cheesy territory and finds the sweet-spot.

The film is a Stigma Films production presented by Quickfire in association with Altitude Film Entertainment, Trigger Films & Pont Neuf Productions, and its international sales are handled by Altitude.

more about: Days of the Bagnold Summer

Interview: Simon Bird • Director of Days of the Bagnold Summer

Cineuropa met up with British director Simon Bird on the afternoon of the Piazza Grande world premiere of his debut film, Days of the Bagnold Summer

Review: Days of the Bagnold Summer 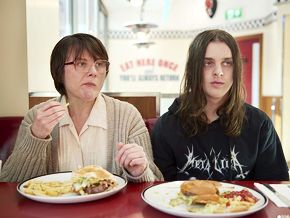