Romanian cinema is not only male-orientated, but it is also ageist, favouring very few senior protagonists. Cătălin Mitulescu’s new thriller Heidi [+see also:
trailer
interview: Cătălin Mitulescu
film profile], now showing in competition at the Sarajevo Film Festival, goes some way towards making amends for this with an engaging story about ambiguous characters and dubious morality. We would say that it is his most accomplished film to date.

After his career was revived by Bogdan Mirică’s Dogs [+see also:
film review
trailer
interview: Bogdan Mirica
film profile], Gheorghe Visu now plays Visoiu, a jaded policeman who is looking forward to his impending retirement, which he plans to spend fishing in the Danube Delta. We see him being assigned a new mission by his boss: he has to find two sex workers who have escaped from a prostitution ring controlled by a powerful mob family. As he meets the fiery Heidi (Cătălina Mihai), the policeman will have to face new situations that challenge his already eroded morality.

The screenplay, written by Mitulescu together with Radu Aldulescu, efficiently builds up the portrait of Visoiu with assured touches. Even when surrounded by people or when joking with other policemen, the protagonist exudes loneliness and resignation. He knows perfectly well that the world is grey, rather than black or white, and no matter what the police do, the world will remain grey. There will always be pimps and gangsters, human trafficking and sex workers selling their bodies in unwelcoming places, a world away from happy families enjoying healthy dinners in their well-lit, cosy apartments.

One of the film’s strengths is how it convincingly presents the policeman as a man with a foot in both worlds. In one scene, we see Visoiu meeting his daughter (Maria Popistaşu) and making plans to take his grandson fishing. In another, Visoiu respectfully negotiates with a powerful family of gangsters. A curt man who knows when to turn a blind eye and when there is potential for a little side job here and there to make ends meet, he is perfectly counterbalanced by the exuberant (but by no means naïve) Heidi. She knows full well what the world wants from her and what tool to use in order to achieve her goals.

Heidi may not offer an innovative story or new forms of storytelling, but this rare and understated Romanian thriller captivates the audience by navigating the murky waters of power and vulnerability, showing how good and evil may be two sides of the same coin, always in contact, always feeding one another – two concepts so closely intertwined that they could cancel each other out. There is a pervading sense of hopelessness (greatly aided by Marius Panduru’s desaturated camerawork), and the characters seem to be aware that, no matter how drastic their decisions and actions might be, they are just fish trapped in shallow waters, waiting for a wave – an indifferent hiccup of destiny or the angry movement of a bigger fish – to push them out of their far-from-safe environment.

It is hard to find a more ambiguous approach to morality in a Romanian film. Mitulescu doesn’t take sides in Heidi, a choice that may challenge the audience to ponder the characters’ destinies. Romanian viewers will be especially intrigued by the story after a murder case that inflamed the country only weeks ago. Allegedly, the police were not able to save a kidnapped teenager because they were too busy checking with local mobsters just to make sure she was not connected to any of their illicit endeavours. Mitulescu’s story goes right there, to the core of a system that is supposed to protect its citizens, but fails to do so.

“In any story, age has a weight”

We chatted about love as a tango and unbalanced relationships with Romanian director Cătălin Mitulescu, whose newest feature, Heidi, is now competing at Sarajevo 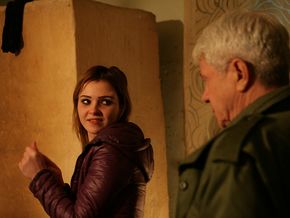 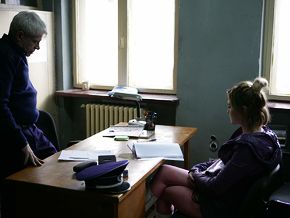