When we meet the older sister, Rudina (Luli Bitri), in her late thirties or early forties, she is overburdened with responsibilities: in addition to working as a seamstress in a local factory, she is taking care of her old in-laws, while her demanding husband works abroad and they only see each other once a year. She is also singlehandedly bringing up their little son, Orion.

Rudina is expecting her sister Elma (Jonida Vokshi) to come back from Italy, where she lives and works, so that they can go and visit their father in their home village, on the anniversary of their mother's death. But when Elma arrives on the ferry from Bari, Rudina is shocked to see that she is pregnant.

The first thought to cross Rudina's mind when she saw her sister's belly must have been something along the lines of, “Now this, on top of everything else.” It will certainly be a problem for the old head of the family to see his unmarried daughter with a child on the way, but as often happens in patriarchal societies, although the men decide, it is the women who have to do most of the work. The whole extended family's needs lie on Rudina's shoulders, and it is no wonder she is terribly irritated and enraged by what she must perceive as her sister's irresponsibility and selfishness.

And Elma does indeed appear to be a naïve, often barely self-aware young woman, when she suggests that Rudina can help her get a job. For some reason, Elma seems to believe that her knowledge of the Italian language would be a plus for the position of a seamstress. Or at least this proposed willingness to work might serve as an argument in favour of her seriousness.

The two women and Orion get on the road and come up with the idea to enlist an old friend of Elma's to play the husband during their visit. Needless to say, the chances of this plan going smoothly would be slim in real life, let alone in a film…

Papas' strong concept relies on the interplay between the two actresses, whose characters go through all the colours of such a deep relationship. Despite Rudina's anger, Elma is still her little sister, and there are a couple of lovely moments that depict their connection – most poignantly, the scene in which they share the moment when Elma's baby starts kicking.

The social aspect of the patriarchal society of a poor country in transition is unmistakable, but Papas doesn't force it beyond the needs of the screenplay, which is utterly economical.

Kosovar DoP Sevdije Kastrati (The Marriage [+see also:
film review
trailer
interview: Blerta Zeqiri
film profile]) puts the ruggedly beautiful mountainous vistas of rural Albania to excellent use as Rudina's little Ford snakes down the patchy roads. In the interiors (the car being the most frequently used), the colour palette leans towards bluish and greyish, matching the desaturated drying grass and rocky terrain around them.

"Albania is a male-dominated society; women suffer a lot of inequality, especially in rural areas, and I care about these characters"

Albanian-born filmmaker Florenc Papas took a moment to dissect his feature debut, Open Door, which is world-premiering at the Sarajevo Film Festival 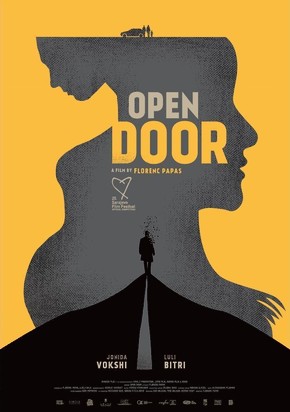