Review: The Euphoria of Being

Éva Fahidi and Emese Cuhorka in The Euphoria of Being

The Euphoria of Being [+see also:
trailer
film profile] world-premiered and triumphed in Locarno's Critics’ Week just days before picking up the Human Rights Award in the Documentary Competition of the Sarajevo Film Festival. It is the first feature-length documentary from director Réka Szabó, a dancer and choreographer in her own right, with her own acclaimed Budapest-based troupe The Symptoms.

This imaginative and often touching film combines several artistic and narrative layers in the story of 93-year-old Hungarian Holocaust survivor Éva Fahidi. The opening segment, in which Szabó chats to Fahidi at the hairdresser's, shows the strong connection between the director and her subject, developed through their work together on a dance performance about Fahidi’s life.

The first layer of the film comes from their initial epistolary contact, after Szabó read Fahidi's memoir The Soul of Things and felt compelled to create a work of art about her. The Auschwitz survivor, whose 49 relatives died in the concentration camp, is also a dancer, and we follow her and the director as they prepare a show with young dancer Emese Cuhorka.

Through performance art, the film paints a portrait of its unique protagonist. As we watch Cuhorka and Fahidi develop the dance, closely directed by Szabó, we witness two performers brought together so close by this tragic yet brave story, that their personalities seem to start overlapping. Both tender and dynamic, these segments are interspersed with interviews with the utterly charming and wise old lady.

In addition to difficult recollections of her past, reflections on fascism and the way they resonate today, Fahidi also offers her thoughts on many other topics. An unexpectedly candid testimony where the woman condemns her own father, claiming that he was only interested in profit while other Jewish families started fleeing Hungary as early as 1935, is a painful reminder for the audience of the thorny reality they are witnessing. This gritty aspect is underlined by the film’s focus on Fahidi's experience as a woman in Auschwitz: she explains that seeing naked, dirty, stinking, emaciated women packed together like sardines in a tin, unable to avoid touching each other, had affected her relationship with her own womanhood for a long time.

The performance, entitled Sea Lavender, had been staged 77 times in Budapest, Berlin and Vienna by the time of the film’s editing. Throughout their rehearsals, Fahidi grows more nimble and confident, and experiences a late-life renaissance thanks to Szabó and Cuhorka's emotional dedication.

Fahidi is a unique protagonist, immensely charismatic and sharp-minded, a no-nonsense lady who boldly leads a full life, and whose survival stands as a brave counterpoint to the tragedy of her family. A single artistic medium would struggle to do justice to her complex story; in combining Fahidi’s memoir with the performance and the documentary interviews, The Euphoria of Being comes pretty close.

The Euphoria of Being is a co-production between Hungary's Campfilm, The Symptoms, 4Cut Post Digital and France's Pom'Zed.

more about: The Euphoria of Being

The feature debut from the Hungarian filmmaker is produced by Campfilm with Mistrus Media, Lilith Films, Propellerfilm and Proton Cinema. Sales are handled by Luxbox

Review: The Euphoria of Being

Other winners include A Tale of Three Sisters, And Then We Danced and When the Persimmons Grew; the Cineuropa Prize went to Rounds 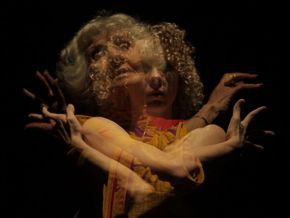