04/09/2019 - VENICE 2019: Alex Gibney tells the story of the oligarch who turned into a rebel after being sent to jail by President Putin

The “K” in the title of Alex Gibney’s Citizen K [+see also:
trailer
interview: Alex Gibney
film profile] stands for Khodorkovsky, as in Mikhail Khodorkovsky. This documentary, screening out of competition at the Venice Film Festival, leaves you with the distinct impression that the billionaire fancies himself as a bit of a hotshot. Following the fall of the Soviet Union, Khodorkovsky became the richest man in Russia. He was one of a gang of the so-called oligarchs, who stripped the government of its assets. They did this by making secret deals with his friends to buy previously nationalised industries at rock-bottom prices and became super-rich while many suffered. He's the type of guy who had no qualms telling interviewers that his motivation was greed. It's hard to get behind this man, even after he spent a decade in jail for being a thorn in President Putin's side. Thankfully, this documentary doesn't want us to.

Gibney is one of America's preeminent documentarians. Amongst his credits are the Academy Award-winning Taxi to the Dark Side, the Emmy Award-winning Going Clear: Scientology and the Prison of Belief, and the Oscar-nominated Enron: The Smartest Guys in the Room. He's a director who has had his misses, too. Having trusted the disgraced cyclist Lance Armstrong about whether he took performance-enhancing drugs, Gibney is now more wary of his subjects. Indeed, he shows some scepticism towards Khodorkovsky. This movie also avoids pretending it has all the answers. What makes Citizen K so good is that Gibney always doubts what he is being told.

A better title for the movie might have been Citizen K versus President P, as Gibney has made a Putin movie by proxy. This documentary seems to talk about Vladimir Vladimirovich Putin as much as it does about Khodorkovsky. It's almost a more fascinating portrait of the former than it is of the latter.

In the first half, Gibney even argues that Putin isn't all bad. That's quite a radical position to adopt in a world where the word is that Russia hacked the US election and helped elect Trump. Gibney shows how post-Soviet Russian President Boris Yeltsin allowed Wild West capitalism to flourish in Russia. At the time, the state was being propped up by rich men with heinous methods. Putin managed to slide under the radar to power, and no one worried about him, because he seemed to be a yes man. But Putin had some tricks up his sleeve and surprised everyone, establishing his power base by blaming Russia's economic woes on the oligarchs. Putin said he would crush them, and that's how Khodorkovsky ended up in jail.

President Putin was firmly in the ascendant. But with great power comes a cult of personality. Now it was Khodorkovsky accusing Putin of abusing his position, wealth and power. The president could call the shots. With the tables turned, Gibney tries to get us to sympathise with Khodorkovsky. However, it's tough to get on side with someone who, after being released from jail, mysteriously finds $800 million behind the sofa. Khodorkovsky went into exile in the UK. It's here that Gibney spends time with him, trying to discover what makes him tick. It's messy, but that's because life is. As the film ends, there are no heroes and villains – just a bunch of "bad hombres".

VENICE 2019: Alex Gibney tells the story of the oligarch who turned into a rebel after being sent to jail by President Putin 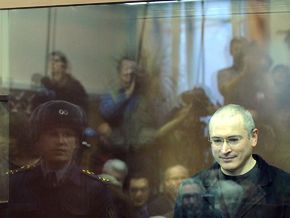