Review: Waiting for the Barbarians

Johnny Depp and Mark Rylance in Waiting for the Barbarians

With the ambiguous and universal locality of an unnamed colonial setting serving as the territorial frontier of an unnamed “Empire” in Nobel Prize-winning author JM Coetzee’s novel Waiting for the Barbarians, it’s fitting that it’s been adapted into an opera by an American (Philip Glass) and for the stage by a Russian (Alexandre Marine). As for the US-Italian film version, Waiting for the Barbarians [+see also:
trailer
interview: Ciro Guerra
film profile], which bowed at the 2019 Venice International Film Festival, Colombia’s Ciro Guerra (Embrace of the Serpent) directs, with South African Coetzee himself writing the screenplay.

Divided into four chapters, each named after a season, it all starts in spring, during which the amicable and well-meaning magistrate (Mark Rylance) of the placid outpost prepares to receive an imperial representative from an especially secretive branch called The Third Bureau. The visitor, Colonel Joll (Johnny Depp, sporting a Prussian super-villain look and rarely seen without black glasses), has heard a rumour claiming the “barbarians” are possibly preparing an attack. In order to nip any unrest in the bud, measures now need to be taken. Surely, claims the friendly magistrate, well acquainted with the “nomads”, as he prefers to call them, there is nothing to worry about. Joll clearly differs (without ever begging to do so) and aims to get to the bottom of it. “Patience and pressure” will set things right, he assures, “pressure” being a euphemism for torture, as will soon become very apparent. The magistrate, too, will get his share, partly courtesy of soon-to-be nemesis Joll and his equally sinister adjutant Mandel (Robert Pattinson, looking like a square-jawed cricket ace), and partly through an encounter with an indigenous girl (Mongolian actress Gana Bayarsaikhan) whom he not only sides with (high treason) but also falls in love with (utterly futile). Winter does indeed look cold and hard.

The spirit of David Lean’s epic cinematic depictions of Britons in colonial environments and/or warfare situations – specifically Lawrence of Arabia and The Bridge on the River Kwai – lingers in terms of both tale and images. The latter are given a handsome look by veteran camera master Chris Menges’ handling of the Moroccan locations, while Marco Beltrami’s musical score manages to instantly delight the ear. Given that times, as well as budgets, have certainly changed since those magnificently affluent Lean years (pun intended), here we have something more akin to a Miramax production of certain prestige – make of this what you will.

Mark Rylance’s fine and complex main performance, reminiscent of classic Alec Guinness at times, remains a high point throughout, while the evils of Depp and Pattinson, possibly intentionally, feel decidedly two-dimensional. The always-welcome thespian appearances by Greta Scacchi and David Dencik are far too short.

Waiting for the Barbarians is a US-Italian production staged by Iervolino Entertainment, Ambi (which is also in charge of the world sales) and Michael Fitzgerald Productions.

more about: Waiting for the Barbarians

Interview: Ciro Guerra • Director of Waiting for the Barbarians

“Some people have called this novel unfilmable, but I could see it very clearly”

VENICE 2019: Ciro Guerra talks about the creative joys and challenges of adapting the JM Coetzee novel in Waiting for the Barbarians, which premiered in the competition for the Golden Lion

Review: Waiting for the Barbarians

Polanski, Gray, Soderbergh, Kore-eda, Assayas, Martone and Larrain feature among the biggest names at the festival, which will take place from 28 August-7 September 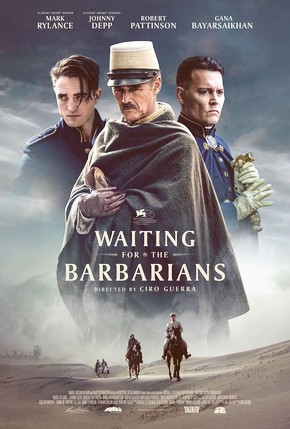 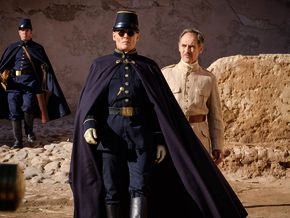