10/09/2019 - VENICE 2019: Oskar Alegría’s second feature film is a cinematographic poem on human attempts to prevent the deterioration of memory

When announcing the line-up for the 76th edition of the Venice International Film Festival, artistic director Alberto Barbera described Zumiriki [+see also:
trailer
interview: Oskar Alegría
film profile], by Navarre director Oskar Alegría, as the least classifiable film of the entire Italian event. Without a doubt, the inclusion of this autobiographical essay in the Orizzonti competition was a huge risk for the festival team as such offerings are anything but abundant in this section. Zumiriki – meaning “island located in the middle of a river” in the Basque language – is a cinematographic poem on the human desire to preserve memory which sees the author of the remarkable metacinematographic documentary The Search for Emak Bakia offering up a poetic study on the deterioration of memory as combined with the disappearance of a physical space.

Oskar Alegría spent his childhood in a location which no longer exists; namely on the island to which the film’s title refers. It was a small island, swallowed up by the waters of the River Arga following the construction of a dam. In his highly intimate and revealing work, Alegría embarks upon an allegorical river journey with the aim of immersing himself in this invisible place which, following its physical disappearance, can now only exist through his memory.

The director documents his return to this location, recreating his paradise lost. His odyssey begins with the construction of a hut on a bank of the River Arga. He will live in this hut for the next four months (from spring through to summer), awaiting the arrival of the ghosts of his past with whom he will relive his distant childhood, in particular that which he shares with his farmer-father, who used to film the untamed nature of the Navarre region in his free time.

Sitting half-way between the iconic Robinson Crusoe and Henry David Thoreau’s Walden, Zumiriki starts out like the diary of a voluntary castaway before ultimately embracing the path of asceticism, because, little by little, words fall away from the film until all that’s left is silence. As explained by the director’s voice-over when the film reaches its climax, the work invites the viewer to inhabit a world where language is overcome by memory.

With his second film, Zumiriki, unveiled at Venice, Spanish filmmaker Oskar Alegría has been hopping from festival to festival; we caught up with him before his touchdown in Seville

The 14th edition of the international documentary film festival of Navarra gets under way in its capital, and will go on until 7th of March with a brave and alternative programme

VENICE 2019: Oskar Alegría’s second feature film is a cinematographic poem on human attempts to prevent the deterioration of memory 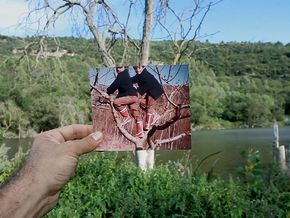