A recurring theme in many films showing at the Toronto International Film Festival this year, cancer, is at the centre of Ordinary Love [+see also:
trailer
film profile], from directorial duo Lisa Barros D'Sa and Glenn Leyburn, which premiered in the Special Presentations section at the 44th edition of the Canadian gathering. Through the prism of illness, the film gently uncovers the way a love that may indeed seem rather ordinary can have roots much deeper and stronger than they may initially appear.

English actress Lesley Manville plays Joan, an utterly pleasant, patient and honest woman a million miles away from the fierce and mean character she recently embodied in Paul Thomas Anderson’s Phantom Thread. Her relationship with her towering husband Tom (Liam Neeson) is as smooth as can be imagined, the couple comfortable around each other, still making each other laugh, living a quiet life together without any bumps whatsoever.

The idyllic nature of their life already suggests that something terrible will soon arrive to shatter that peace, and so it does. Just a few minutes into the film, Joan notices a lump in one of her breasts. The serenity with which the couple deals with the imminent diagnosis suggests years of experience encountering all sorts of obstacles – the film regularly hints at the sudden death of their young daughter some years ago – and in following Joan and Tom through the many steps of the treatment, Ordinary Love paints a portrait of quiet resilience that can be quite endearing, and even inspiring. When Joan begins chemotherapy, the movie does not shy away from showing the loss of hair and other distressing side effects of the taxing treatment, such as the way the pain makes her uncharacteristically irritable and impatient.

Meanwhile, Tom sticks by her side, never doubting his love for Joan for a second. The experience does not throw a spanner in the works of their relationship in the way so many films have portrayed before, and instead of neglect and bitterness, Tom only has care and attention to lavish upon her.

The elegant cinematography, with warm colours and rich textures, as well as the minimalistic score, underline the gentle and graceful nature of the relationship, and every minor argument sharply stands out from the usually harmonious ensemble. But it never truly threatens to shatter it, and though Ordinary Love beautifully shows the virtues of taking it one day at a time, its lack of dramatic tension eventually gives the film a rather sentimental tone. Its good intentions are irredeemably tarnished when it lazily resorts to the clichéd narrative device where the possible outcome of actual death does not, of course, happen to the lead couple, but to another one on the periphery of their lives. That the couple happens to be gay feels like a trick to make us sympathise with Joan and Tom – so modern, so progressive – but at the end of the day, it is just another instance of the tragic death of a gay man used for the benefit of a straight story.

Ordinary Love is a UK production staged by Brian J Falconer for Out of Orbit, David Holmes for Canderblinks Films and Piers Tempest for Tempo Productions, with backing from Northern Ireland Screen. Bankside Films is handling the international sales.

After a one-year break and the subsequent reorganisation of the body, this year’s edition saw the triumph of Lance Daly's Black '47 and Lisa Barros D'Sa's Ordinary Day

Principal photography will commence in early July on the film directed by Lisa Barros D’Sa and Glenn Leyburn, based on a script by celebrated Irish playwright Owen McCafferty 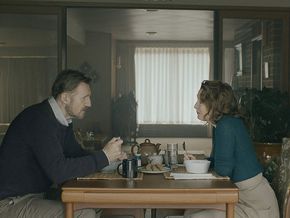