Felicity Jones in The Aeronauts

There is so much hot air in Tom Harper's low-flying The Aeronauts [+see also:
trailer
film profile] that the character of Amelia Wren has been entirely conjured up from nothing. The British drama debuted as a lofty Gala Presentation at the Toronto International Film Festival.

The film plays so loose with the truth that it feels like a complete fabrication. Felicity Jones' Wren is a fictional amalgamation of three different people: one man and two women. Henry Coxwell, who accompanied James Glaisher when he broke the world flight altitude record on 5 September 1862, has been completely ejected from this history. Presumably, to connect with modern audiences, the film purports that a man and a woman made this historic journey together. There are elements in Wren's backstory similar to that of Sophie Blanchard, the first woman to work as a professional balloonist, who became celebrated following her husband's death. Wren is also concerned with being an entertainer, which was a trait of British aeronaut and performer Margaret Graham.

Nonetheless, despite Wren being a record breaker, female pioneer and entertainer, the filmmakers neglected to give her a winning personality. It's understandable, given the dearth of heroic female roles in cinema history, that filmmakers want to redress this gender imbalance, but this doesn't feel like the way to go. There have been so many amazing women ignored in history that rewriting history as a more gender-balanced world than it actually was doesn't help. It gives a false impression. It would be better to actually tell stories of real women than posit females in masculine roles, as this film does.

Opposite Jones, Eddie Redmayne is miscast as Glaisher. The casting reunites the pair of actors who took the Stephen Hawking biopic The Theory of Everything [+see also:
trailer
film profile] to Oscar glory. Presumably, they were both employed with similarly high hopes for this blockbuster movie, but The Aeronauts struggles to get off the ground.

The narrative structure sees Wren and Glaisher take their record-breaking flight skywards in 1862, with flashback sequences showing us how this unlikely pairing ended up on this journey together. Glaisher wants to go on a balloon journey so that he can conduct tests that will create a scientific method of predicting the weather. Yesterday [+see also:
film review
trailer
film profile] star Himesh Patel plays John Trew, the only man who believes in Glaisher. Wren is a circus performer who was taught all about hot-air balloons by her husband, who died tragically. Her sister (Phoebe Fox) tries to help her sibling cope with her grief.

This flashback structure is not particularly coherent. Why there is a counting clock on screen, which disappears for no reason halfway through the story, is not adequately explained. It seems to be an attempt to inject some tension and a sense of peril into the film. The flashback structure completely takes the drama out of the scenes where the protagonists are worried about whether they will get off the ground, because we already know the answer.

The action sequences are also poorly executed. An early storm scene makes the actors feel like they are at sea, rather than up in the sky. They are wet one second and dry the next. It doesn't feel breathtaking, even when Wren climbs to the top of the balloon at 30,000 feet. It was filmed to be shown in IMAX, but a failure to accept the 90-day exclusive IMAX window means that the action sequences will mostly be watched on television after a short theatrical run.

The Aeronauts is a US-UK co-production staged by Amazon Studios, Mandeville Films, One Shoe Films, Popcorn Storm and FilmNation Entertainment, which is also in charge of its world sales.

more about: The Aeronauts 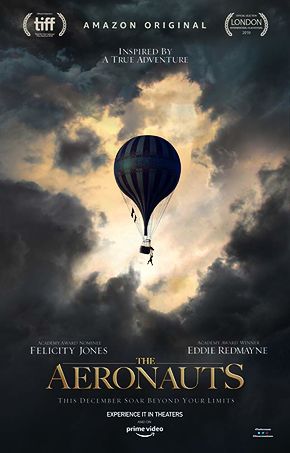 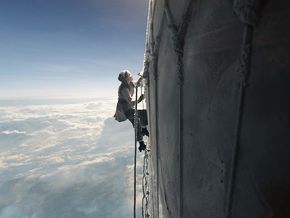 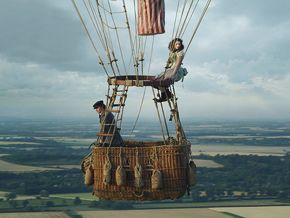