Review: Sweetness in the Belly

Zeresenay Berhane Mehari's Difret, about forced marriage in Ethiopia, won the Panorama Audience Award at the Berlin Film Festival in 2014. He's a great choice to adapt Camilla Gibb's novel Sweetness in the Belly [+see also:
trailer
interview: Zeresenay Berhane Mehari
film profile] for the big screen. However, the director was damned before he had a chance to prove himself. That's because the project was deemed controversial even before playing in the Discovery section of the Toronto International Film Festival.

The book adaptation faced accusations of whitewashing after a clip surfaced on the internet, and people jumped to the wrong conclusions. The internet felt it was wrong for lead actress Dakota Fanning to play an Ethiopian refugee, given the historic failure of movies to tell African stories from a black perspective. It's a good fight, but it's also one that Sweetness in the Belly wants to support, too. Sometimes it pays to wait to see a project before casting a damning judgement.

Strangely enough, the film highlights how the world favours whites. The helmer is more concerned with recounting the history of Ethiopia at the time of the removal of Haile Selassie, Emperor of Ethiopia, in 1974, than he is with telling an immigrant story from a white perspective.

It's a delicate film about immigrant communities and the struggle to overcome past traumas, told with feeling and compassion. But with anything this fragile, it doesn't take much for it to break. It's not the representation of the central character that is the issue, but rather Fanning's struggle to make her Lilly a rounded, believable character. In Fanning's defence, it's a tough role. She is an American playing a Brit, who grew up in a Sufi shrine in Ethiopia, which means she has to spout dialogue in Arabic. Rather than condemned, the filmmakers and actress should be commended for daring to try harder, and for not taking the easy option of simply making another film set in Africa in the English language.

The life of Lilly seems to be a series of plot points. Abandoned by her parents, she's left to grow up in a Sufi shrine. She supports others, helping victims of forced circumcision, falling in love with Aziz Abdul Nasser (Yahya Abdul-Mateen II) along the way. When she's forced to leave the country for unclear reasons, she moves to London, where she discovers the truth about her parentage. Lilly starts working in a British hospital, where she meets an Ethiopian woman, Amina (Wunmi Mosaku), and her young son, Ahmed (Rafael Gonçalves). Lilly helps Amina start a voluntary support group to help people find relatives back in Ethiopia. However, Lilly's lack of substance becomes even more apparent whenever the charismatic Amina is on screen. The director might have done well to follow Amina’s story because she is a more interesting character, and Mosaku delivers the film's most commanding performance.

Rounding off the main cast is doctor Robin Sathi (Kunal Nayyar). The doctor is an eccentric character who hides in the medical room to read books, and then starts to try to woo Lilly.

Where the film holds most interest is when it shows archive footage and takes a look at the strife in Ethiopia. There is a potted history that incorporates the anti-Derg movement. But the movie can't decide whether it wants to be about Lilly or about Ethiopia, and never overcomes this conflict.

Sweetness in the Belly is an Irish-Canadian production. It is a HanWay Films and Entertainment One presentation of a Sienna Films and Parallel Films production, with the participation of Telefilm Canada, Eurimages, Ontario Creates and Screen Ireland. HanWay Films has the international rights.

more about: Sweetness in the Belly

Interview: Zeresenay Berhane Mehari • Director of Sweetness in the Belly

Cineuropa spoke to Zeresenay Berhane Mehari about various aspects of Sweetness in the Belly, his adaptation of the Camilla Gibb book

Review: Sweetness in the Belly

Zeresenay Berhane Mehari’s Sweetness in the Belly in post-production 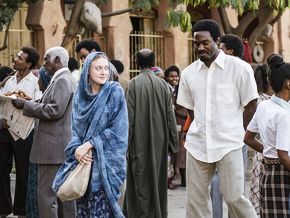