Review: The Taste of Pho

25/09/2019 - The Japanese director living in Warsaw Mariko Bobrik serves up an exquisite film on food, identity and modern times

Thang Long Do in The Taste of Pho

“We live in Europe; you don’t eat rice here every day!”. Integration also takes place by way of food in The Taste of Pho [+see also:
trailer
film profile], the debut film by the Japanese director living in Warsaw Mariko Bobrik which was presented in a world premiere in the Culinary Cinema section of the 67th San Sebastian Film Festival. Mia (Lena Nguyen), the film’s pint-sized protagonist, would much prefer a good old ham panini to take to school with her, rather than the traditional Vietnamese dishes her father Long (Thang Long Do) meticulously prepares for her each and every morning. And when we see that the pleated skirt which Long lovingly irons for his daughter each and every day is rapidly substituted for a pair of jeans as soon as Mia turns the corner, we understand that there’s a father-daughter conflict in action here.

It’s not by accident that we use the words “each and every morning” and “each and every day”, because it’s this very daily routine which is explored by the Fukuoka-born director and Łódź Film School graduate; the small gestures that are repeated in identical fashion each and every day in the home of this truncated family, before leaving for school or for work. The widower of a beautiful Polish wife whom we catch a glimpse of in photos, loving Long tries to keep his identity alive (in Poland, Vietnamese people are one of the biggest ethnic minorities in the country), both in everyday life and through his job as a chef in a Vietnamese restaurant specialising in pho, a traditional soup made from meat, herbs and noodles.

Long is happy living in Poland and he’s happy with his job, but he seems to linger one step behind the modern world: he insists on repairing things rather than replacing them (even though the parts he needs for his old washing machine were discontinued years ago), he’s convinced that girls still wear pleated skirts, and when the restaurant’s aggressively ambitious new owner changes the menu and forces Long to sign up to a sushi course, he struggles (“but I’m not Japanese…”). His daughter, meanwhile, is fully integrated. Her only real concern is that her father might forget about her dead mother, a worry no doubt fuelled by their fetching neighbour Kasia (Aleksandra Domańska) whom the child secretly spies on.

A story of food and identity, love and incomprehension, work and modern times, The Taste of Pho offers up a slice of this family’s daily life and conveys with great sensitivity the inner conflict of those living far from their country of origin. Caught between tradition and integration, good-natured Long clings onto the flavours of his homeland, but, ultimately, it will take more than the concoction of a few Thai or kebab-based dishes to distance him from who he really is. Mariko Bobrik’s gaze is discrete and original; she frames objects, bodies rather than faces, steaming hot plates of food… Mention should also be made of the Japanese jazz pianist and composer based in Berlin, Aki Takase, whose beautiful original music adds a touch of light-heartedness, de-dramatising the film wherever the moment requires it.

Produced by German firm Rohfilm Productions and Poland’s Lava Films, in co-production with Opus Film (Poland) and with the support of Medienboard Berlin-Brandenburg, the Polish Film Institute and the Lodz Film Fund, The Taste of Pho is sold worldwide by New Europe Film Sales.

more about: The Taste of Pho

Review: The Taste of Pho

The Japanese director living in Warsaw Mariko Bobrik serves up an exquisite film on food, identity and modern times 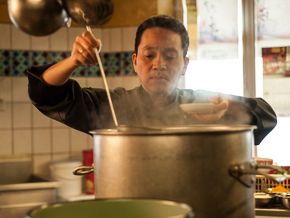 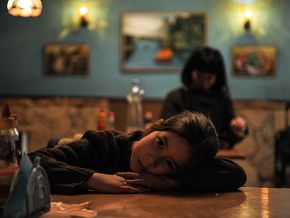