01/10/2019 - Juliana Fanjul’s film gives a platform to journalist Carmen Aristegui, one of the most powerful voices in the Mexican opposition

For her second feature, Radio Silence [+see also:
trailer
interview: Juliana Fanjul
film profile], which had its world premiere at the Zurich Film Festival in the international documentary Competition, Juliana Fanjul chose to stay in her native Mexico, but to work in a totally different register.

While her first film, Muchachas [+see also:
film review
trailer
film profile], described the everyday lives of a group of women living in the shadows — the housekeepers who, every day, take care of the houses of rich Mexican families — this time, the Mexican director living in Switzerland has decided to focus on a public character: the journalist Carmen Aristegui, mythical for some, infamous for others.

So utterly incorruptible that she seems to possess a mystical aura, Carmen Aristegui represents, for the millions of people who support her, the only alternative voice to the official line. Seemingly immune to fear, Carmen dedicates all her time to unveiling the truth hidden by a supposedly respectable but in reality utterly corrupt Mexican government, led by the same political party for 70 years. Disinformation is the journalist’s true fight, a festering wound which the government attempts to heal by getting Aristegui fired from her job as a radio journalist after she and her team reveal a corruption scandal that involves the president himself. This choice will spark collective indignation and trigger a media war in favour of freedom of speech and of the press.

“The portrait of Mexico is the face of the assassinated journalists” is clearly stated at the beginning of the film, which opens on the murder of Javier Valdez Cárdenas, founder of the newspaper Ríodoce and important voice in the opposition. The event is a source of anger which hovers over the entire film like a thin but persistent mist, amplified by the background music which accompanies images of a Mexico suffocated by a peace described as “mafia-like”.

Though those in power have no qualms about unleashing tons of ready-made slogans and thunderous military parades, a deafening silence (as described by the director in voice-over) takes over following the firing of Carmen. A silence which the journalist, whose words seem amplified (or rather, penetrated) by the presence of the director’s camera, isn’t planning to let last very long. From then on, the film follows the eventful everyday life of Carmen, who sets up and leads her own investigation unit, the sole ray of light in a monothematic and intoxicated media landscape.

Instead of really showing the horror (we only ever see glimpses of it), Juliana Fanjul suggests, which is an undoubtedly more powerful approach. She makes us imagine the worst, but without depriving her heroine of the kindness and sense of humour that make her so special. The off-camera voice of the director (whose words, pitiless but terribly real, are chosen with great care) gives the film a bittersweet flavour, as poetic as it is strong.

“We are all Carmen”, chants the crowd protesting her firing, as if to remind us that we all carry without ourselves the courage to rebel against a soporific official line.

Radio Silence enriches a discourse on Mexico which the filmmaker seeks to complexify with each film. Like a kaleidoscope pointed on a complex world in constant mutation and with a visceral need for voices and images that are true and brave.

At the Zurich Film Festival, Cineuropa had a chat with Juliana Fanjul, director of Silence radio, about Mexican journalist Carmen Aristegui

Other winners at the 19th, online edition of the Kosovo event include The Earth Is Blue as an Orange, Smog Town, Collective, Sun Dog, The Exit of the Trains, Radio Silence and Strike or Die

Juliana Fanjul’s film gives a platform to journalist Carmen Aristegui, one of the most powerful voices in the Mexican opposition 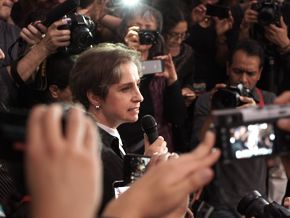