Review: The Miracle of the Little Prince

“The Little Prince didn’t know that, for kings, life is easy. Everyone in the world is their subject,” Tibetan translator Noyontsang Lhamokyab reads aloud. One wonders whether Antoine de Saint-Exupéry knew how remarkably striking his writing would prove to be for Lhamokyab and his colleagues across the globe. With The Miracle of the Little Prince [+see also:
trailer
film profile], which world-premiered during the 31st IDFA and is currently in competition for the Best Feature-length Documentary gong at this year’s edition of the Nederlands Film Festival (27 September-5 October), Dutch director Marjoleine Boonstra lays bare both the fragility and the importance of language, as she tours the corners of the Earth to visit cultures on the verge of disappearance – all of which chose The Little Prince as a symbol of their spirit. The book has been translated into over 300 different languages, making it the bearer of much more than just a timeless tale.

Boonstra’s documentary starts with fragments taken from the children’s book to ease us into Saint-Exupéry’s universe. The Little Prince questions the creatures he meets and the strange world he encounters, until he finds answers that make sense in one way or another. It is described as if the people living on Earth had forgotten how they arrived at this specific time and place. Boonstra draws parallels as she poses questions such as: why do certain languages, cultures and people perish while others thrive? We are invited to adopt the viewpoint of the Little Prince himself, which makes the current state of things less evident.

The film unfolds at a very deliberate pace. Slow but beautiful sequences of barren, sandy landscapes and deserted cities lead us to Amazigh speakers in Morocco as they try to deconstruct the Arabic influence and investigate their own cultural concepts through language. As the people read the book, it becomes a mirror, reflecting who they truly are. Day-to-day rituals are shown, as a man loads three sheep onto a scooter. A young boy is standing on the sand-coloured rocks, looking down at the scene, again from a similar viewpoint. It’s as if he came into this world estranged, like the Little Prince himself. Sandstorms turn into blizzards as we move thousands of kilometres north to listen to Sámi translator Kerttu Vuolab: “Languages are like stars,” she says: “the more you look to the sky, the more stars you see. The more you use a language, the more you start to understand it.” It affords a glimpse into the world behind the letters; the loss of a language means the loss of a specific way of perceiving the world.

A stolen language is like a stolen territory; they are both places where you can feel at home, and something you want to leave to your children, be it in a physical way or an emotional one. This extreme stillness, forcing us to adjust to a new rhythm of the passage of time, allows us to see on a grander scale, as nations and peoples come and go. Boonstra’s film makes one wonder about how cultures behave towards one another, hinting at patterns of coexistence – patterns of how people are constantly unable to understand each other, everywhere.

The Miracle of the Little Prince is a Pieter van Huystee Film (Netherlands) production, co-produced by Norway’s Indie Film.

more about: The Miracle of the Little Prince

Review: The Miracle of the Little Prince 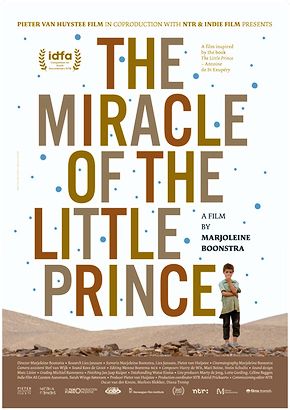