The last world premiere at this year's IndieCork Film Festival was that of Diarmuid Galvin's documentary Splitting the Sop. Galvin's directorial debut comes after a ten-year career as a camera operator and photographer in the Irish film and television industry.

Splitting the Sop documents the surprisingly rich history of the indigenous sport of Irish road bowling. This sport, mostly played in the Emerald Isle as well as in the Netherlands, Germany and Italy, sees competitors attempting to take the fewest throws to propel a metal ball along a predetermined path on country roads. In today's Ireland, road bowling is mainly played in the counties of Armagh and Cork, and is regulated by the Irish Road Bowling Association (Bol Chumann na hEireann). The film is divided into three parts, entitled “History”, “People and Places” and Community”.

In the first chapter, the documentary tells us the origins of this sport, the very first games of which probably date back to the 17th century. We get to know Séamus Ó Tuama, an academic and journalist at the Cork-based daily newspaper The Irish Examiner, who is well versed in the history of this activity and its place in local folklore. Ó Tuama compares the Irish version of the sport with the forms practised in other parts of Europe, and explains that the Italian one is perhaps the closest in terms of rules and playing style.

The second part revolves around the most important road-bowling players in Irish history and their legendary games. We learn about champions such as Mick Barry, Liam O'Keefe, Kieran Gould, Tim Delaney, and John and Jim O'Driscoll as well as curious characters such as John Buckley, Bishop of Cork and Ross, and an accomplished road bowler to boot. Finally, the third part highlights several road bowling-related social and didactic initiatives, aimed at educating children and people with special needs. More interestingly, during one of the last scenes in the documentary, Ó Tuama expresses his contentment, saying that the spirit of road bowling has not changed fundamentally over the years; this sport is still practised by people of all ages just for the sake of playing it and partaking in a pleasant experience within the local community. Other popular sports, such as football, have lost their original significance, and are now driven by profits and other interests.

Aesthetically speaking, the style of this documentary is far from original; the history of this discipline is told through the use of a plain voice-over commentary, a number of interviews with Ó Tuama and former players, and a good amount of archive footage, mostly shot between the 1920s and the early 1990s. Nevertheless, the topic is treated in an engaging manner, even for those who are not familiar with Irish culture, road bowling or other Gaelic sports. On the whole, the film is a good, informative piece of work, and utilises simple words and several compelling testimonies to teach us the significance of Irish road bowling – and, more generally, community sports – as a means of social cohesion and cultural enrichment.

Splitting the Sop was produced by Cork-based Laoi Film, which is also in charge of its domestic distribution.

more about: Splitting the Sop 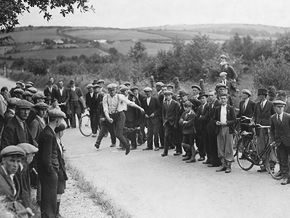