One might say that the doc’s main function is informative, as it turns the audience into witnesses of the grandiose – at times frightening and at times absurd – ceremony, which somehow attempts to show one final time that Stalin was an immortal god, rather than a mere man. Devoid of any commentary (except for the sound design), State Funeral simply exhibits the massive ceremony, leaving viewers to react to what they see.

The documentary impresses (and at times becomes tiring) by dint of accumulation. Every element of the funeral is presented in minute detail, from the arrival of state dignitaries with their awkward handshakes and faked sadness, to mournful speeches in factories, the gigantic procession of people who come to see Stalin’s coffin exhibited in the House of Unions in Moscow, the coffin’s transportation in a horse-drawn car to Red Square and, finally, the actual burial in Lenin’s Mausoleum.

There are various reactions that the audience may exhibit while watching this gigantic deployment of forces. Thankfully, we are at a safe distance in terms of history, and there is a detachment from those decades when only one man could stop time and a handful of politicians could hold the entire world in fear of nuclear war. There is also an unnerving sensation when watching the thousands and thousands of people patiently waiting in line to get a glimpse of the coffin covered in a mountain of wreaths. We know they should be rejoicing that a monster is dead, but yet they cry. And we can only feel compassion for them.

Some may say that the biggest merit of the film belongs to editor Danielius Kokanauskis, who studiously stitched together footage to show the event that, in one way or another, affected the entire Soviet Union (the territory of which covered 11 time zones). However, there are a few directing choices that leave an impression on the audience – for example, the fact that we almost don’t get to see the dictator’s face. It is as if his life and actions never existed, as if he were only a nightmare that ended with his death. The only issue is that those affected by the neverending cult of personality surrounding Stalin did not actually want to wake up.

A very important part of this film’s recipe is its sound design. The images are accompanied by various declamations on loudspeakers, all praising the deeds of Stalin. Many are incredibly absurd, struggling to balance out the negatives (Stalin had just died, after all) and the compulsory positivism of the communist doctrine. Just one example is: “There is no death here! There is only eternal life! Immortality! Stalin’s immortality is in his deeds. It is in communism that we shall achieve. We shall certainly achieve it, for Stalin taught us how to!”

The co-producer of Agnieszka Holland’s Spoor and Sergei Loznitsa’s State Funeral is working on four new fiction and animated projects, and is part of Producers on the Move

“The aspect I love most about our audience is its curiosity” 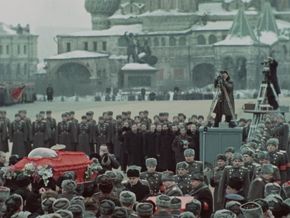