Review: The Makavejev Case or Trial in a Movie Theater

29/10/2019 - Goran Radovanović's docu-fiction hybrid reveals sofar unknown recordings relating a scandal around WR: Mysteries of the Organism after which Dušan Makavejev had to leave Yugoslavia

In his latest docu-fiction hybrid The Makavejev Case or Trial in a Movie Theater, Serbian helmer Goran Radovanović (Enclave [+see also:
film review
trailer
film profile]) pays homage to Dušan Makavejev, arguably the greatest Yugoslav film director of all time. But more importantly, the film reveals the previously unknown recordings of an event that determined the destiny of the legendary filmmaker’s masterpiece WR: Mysteries of the Organism in his home country and forced him to leave. The title won the best film award in the national competition at Belgrade FEST in February this year, exactly one month after Makavejev died, and has now had its international premiere in the Between the Seas section of the Ji.hlava International Documentary Film Festival.

In 1971, Makavejev became a world-wide critics' darling after WR: Mysteries of the Organism screened at the Berlinale and Cannes. This wild and explicit docu-fiction reflection on the relation between communism and free love, based on the works of controversial Marxist psychotherapist Wilhelm Reich, was met with outrage in Tito's Yugoslavia. A "public court trial" was staged in a Novi Sad cinema, where the screening of the film was followed by a debate between film professionals and low-level Communist Party representatives of factories and public companies.

Although the Yugoslav security service forbid any recording of the event, sound recordist Slobodan Miletić managed to sneak in equipment and produce five reels of tape of audio material. Radovanović opens the film with Miletić, Nagra and mic in hand, arriving at the multiplex which now stands in the place of the old cinema. Two young men are bringing in a lectern, and a boy on a skateboard rolls in Tito's bust.

What follows is an artistic re-enactment of the discussion in which film professionals and critics, including those close to the Party, defend the work, while "honest communists", "regular viewers" and small aparatchiks attack it, calling it scandalous, offensive, disgusting, anti-communist, and anti-Soviet. The film ends with Makavejev's own speech, a gem of honesty, intelligence and insight which reveals a truly dedicated Marxist and an incredibly talented filmmaker questioning his own convictions.

Some of the figures closely connected to the film and this event are shown listening to the tape, in more or less successfully staged scenes. These include the star of the film, actress Milena Dravić (who died in 2018), standing by her own picture in the Belgrade Cinematheque, and actor Svetozar Cvetković, who later starred in Makavejev's 1991 film Gorilla Bathes at Noon, in front of a chimpanzee cage in the Belgrade Zoo.

Despite being somewhat too direct in its metaphors, Radovanović's film represents an invaluable document of an era, but inevitably, although it does not include any new commentary, provokes comparisons with events that took place both long before and after the event. Reich's own works were banned and burned in the USA in 1956, where he, a Viennese Jew, escaped to in 1939, and after 1971 Makavejev was also forced to go make his films elsewhere.

Back then, the Party cleverly "let the people" judge the film — there were no high-ranking officials at the event. This mechanism was later reflected in the warmongering role of the media in the 1990s Yugoslav wars, and today it is the court of tabloids and social media that creates public opinion and directs outrage at artists and other figures who offend any specific group, but particularly the "moral" and "healthy" majority.

The Makavejev Case or Trial in a Movie Theater is a co-production of Serbian companies Nama Film and Oktobar Film.

more about: The Makavejev Case or Trial in a Movie Theater

Review: The Makavejev Case or Trial in a Movie Theater

Goran Radovanović's docu-fiction hybrid reveals sofar unknown recordings relating a scandal around WR: Mysteries of the Organism after which Dušan Makavejev had to leave Yugoslavia

The Golden Atlas has gone to Kristina Grozeva and Petar Valchanov’s film, while the Silver Atlas was bestowed upon Anna's Life and Kills on Wheels was singled out with four prizes 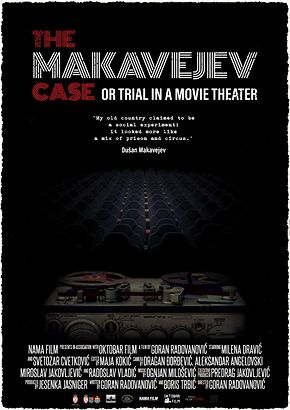