Through both repertory screenings and new films, the 23rd Ji.hlava International Documentary Film Festival offers a strong focus on Ukrainian films this year. In the retrospective programme called Conference Fascinations, these films uncover the “bold allegorical, radically poetic and unusual documentaries produced at the fringes of the official structures of the post-war Soviet regime in Ukraine,” as noted by programmer, Andrea Slováková. But two new films are being screened as well. German-Ukrainian co-production The Building [+see also:
trailer
film profile], by Matilda Mester and Tatjana Kononenko, is a stunning entry in the First Lights section of the festival.

The film sees the filmmakers travel to Kharkov, Ukraine, to pay cinematic homage to one of the most iconic buildings in Soviet history: the Derzhprom Palace. Built in the 1920s to house the industry Ministries, it also embodied the idea of a new, fair and egalitarian society. The impressive cubist-constructivist building inspired several legendary artists, including filmmakers such as Dziga Vertov and Sergei Eisenstein, who used it in their films as a symbol of bureaucracy, or as a playground for the Man with a movie camera. Today, it continues to fascinate photographers and historians, and confuse the people of Kharkov with its distorted, archaic sense of time (the offices in it are set kilometres apart, explains Kononenko) and its purpose, so far removed from the ideology of a post-transitional country.

Mester and Kononenko go about its portrayal methodically. They are interested in what the Derzhprom palace looked like while it was still in its building stage, and how it changed over the years. They use a lot of archival footage to that end, sought in archives in Ukraine as well as in Russia (though they ultimately only used those found in the former). We see the Derzhprom palace in the 1920s, when it was first made; through the beginning of the Stalinist era, which brought about a change of ideology and therefore a change in its purpose; the last decades of the Soviet era; the 1970s and 1980s; and finally, the present-day building, with its employees and wandering tourists.

Most importantly, the filmmakers do not separate the building from the philosophy behind it, a move which would undoubtedly neutralize the architects’ original political purpose. Juxtaposing images of Derzhprom with quotes from manifestos and other texts by Marxist and Leninist thinkers, the film creates an almost romantic vision of a society of the future, a world where everything belongs to everyone, including art and architecture: everyone can do art, everyone can understand it. Mester and Kononenko perhaps go against the grain here by not naively condemning the communist era in favour of western capitalism, as is often the case with films made in the last few decades. Instead, their portrayal of the Derzhprom palace is as subtly nostalgic for the idealism of the early 20th century, as it acknowledges the fears and dystopian visions of the newly-formed society of the time.

more about: The Building 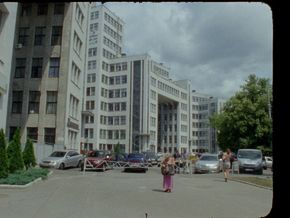 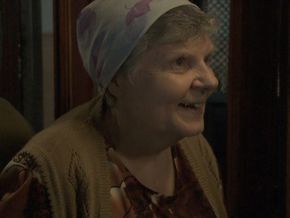 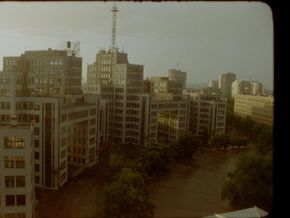