30/10/2019 - Marcus Vetter goes behind the scenes of the World Economic Forum and delivers an unprecedented view of the event and a who’s who of world politics, economy and science

In his latest documentary The Forum [+see also:
trailer
interview: Marcus Vetter
film profile], German filmmaker Marcus Vetter takes a look behind the scenes of the World Economic Forum in Davos. As the first independent film director to get such incredible access, Vetter has also received the honour of opening the 62nd DOK Leipzig festival with his film, which is playing in International Competition.

The film is bookended with the Davos events of 2018 and 2019, and first focuses on the organisation's founder and executive chairman, Klaus Schwab. While WEF's stated "commitment to improving the state of the world" may seem questionable from today's perspective, limited by the organisation’s media coverage, the German expert who established it in 1971 is indeed a unique figure whose dedication to this goal is indubitable. Vetter sets the record straight on Schwab's intentions and on his borderline magical, old-school diplomatic skills, balancing between opposites such as Jair Bolsonaro and Greta Thunberg, heads of Nestle and of British Petroleum, and representatives of Greenpeace.

Schwab's father was a friend of German chancellor and economist Ludwig Erhard, who pioneered the idea of social market economy later promoted in West Germany by Konrad Adenauer. This idea was Schwab’s initial inspiration, and he is holding onto his ideals, uneasy yet unfased as he answers tricky questions about the morality and usefulness of strategic partnerships with the likes of Monsanto.

Jennifer Morgan of Greenpeace, meanwhile, argues that there is no better platform than the WEF to communicate with the "bad guys". She explains that she is ready to talk to them and make them "really uncomfortable", and she does, both in private meetings and panel discussions. But who is really left uncomfortable by these conversations is another matter.

In between the two Davos events, Vetter follows the WEF projects in which other important people from the organisation figure prominently, including managing director Murat Sönmez and president Børge Brende. The projects include the Zipline system for transporting donated blood in Rwanda and Ghana by means of a drone, developed by one of WEF's Social Entrepreneurs; or the Forum's participation in the ASEAN Summit, where Brende tactfully but directly questions Aung San Suu Kyi about jailed Reuters journalists and the Rohingya crisis. We get to see both their stage encounter, which was widely televised, but also a squirm-inducing meeting behind closed doors that ends in an absurd exchange about air conditioning in hotel rooms.

The final part of the film is focused on the 2019 Davos event, which is very different from the previous one. This time around, there is no May, Trump nor Macron; instead, Bolsonaro and Thunberg are there, and an exchange between the Brazilian president and Al Gore is surely one of the most priceless moments in documentary cinema this year.

The list of protagonists of the film reads like a veritable who’s who of world politics, economy and science, just like Davos itself. It is impossible to do full justice to such a huge topic in a 116-minute film, but Vetter manages to provide an unprecedented image of it with admirable balance — perhaps not on par with Schwab's diplomatic skills but pretty damn close for a filmmaker. While the film has a liberal outlook, it remains an intricate web of facts, snippets of conversation, ideas and well-driven points reminding us that nothing is black-and-white and that, despite the Nestles and Bolsonaros of this world — or rather because of them — the World Economic Forum is a crucial platform through which it is maybe, just maybe, still possible to improve the state of the world.

more about: The Forum

Marcus Vetter goes behind the scenes of the World Economic Forum and delivers an unprecedented view of the event and a who’s who of world politics, economy and science 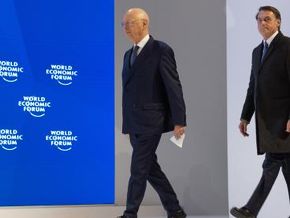