Gunther’s disease: a rare form of Erythropoietic Porphyria; that is, a hereditary blood disease which includes extreme sensitivity to light among its various symptoms. "It’s said to have given rise to the vampire myth". So is Blood Bags [+see also:
trailer
film profile], screened in a world premiere at the Trieste Science+Fiction Festival, a film about vampires? Not exactly. Emiliano Ranzani’s first feature film, which he wrote together with Davide Mela, is an elegant homage to the films of Dario Argento and Lucio Fulci, and a nod to the slasher movies of Halloween’s John Carpenter, Wes Craven and, most importantly, Tobe Hooper. The family link characterising Hooper’s films is reminiscent of that in Blood Bags, which could, in this respect, be likened to The Texas Chainsaw Massacre, which was brought to us by the great master who departed this world two years ago. In Ranzani’s film, the "creature" is hidden away from the world by his brother Vittorio (Alberto Sette), who lovingly - and consistently - provides him with bags full of blood (hence the title) drawn from the veins of a prostitute in exchange for cash. And all this in a bid to prevent his eerie little brother, who suffers from Gunther’s disease, from going on the prowl and seeking out his own blood by slitting the throats of unwitting donors.

The story unfolds in Turin, which is one of three cities to form part of the black magic triangle (alongside London and San Francisco) and the location where Dario Argento shot several of his masterpieces, ranging from The Cat o’ Nine Tails to Four Flies on Grey Velvet. Trapped, in rapid succession, within the old building where the monster of Blood Bags lives are the thief Alex (Emanuele Turetta) - whose friend’s throat is immediately cut with a huge knife - American student Tracy (Makenna Guyler), who’s on the hunt for photography locations, her pal Petra (Marta Tananyan) and a policeman (Salvatore Palombi). There are, of course, corridor-based chases and multiple stabbings, but there are also more sophisticated sequences which have less of the slasher movie about them (such as the dreamlike scenes where a music box ballerina is transformed into a monster). These bring to mind films of the 1980s, with subtexts which speak to us of blood ties.

Ranzani, who, in 2011 and under the aegis of Richard Stanley, was involved in writing the screenplay for one of the tales featured in the anthology film The Theatre Bizzarre, is an excellent craftsman when it comes to the world of horror, and we hope that, in the future, he’ll develop a more original style of writing. Otherwise, this determination to "pay tribute to the masters" might start to feel like an excuse for remaining mired in the past, rather than seeking out new ideas or fresh blood.

Blood Bags is produced by Grey Ladder, with international distribution in the hands of British firm Devilworks. The latter recently sold the rights for the film to High Octane Picture for North America, with Taiwan, India, Germany, Austria and Switzerland, Benelux, Scandinavia, Spain and Italy (via on-demand platform CG Digital) having also acquired these rights. 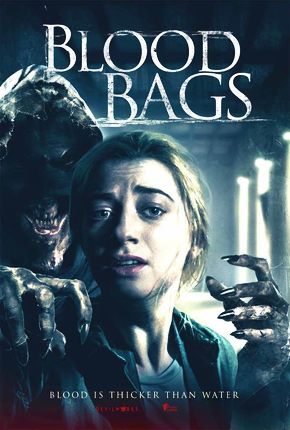