12/11/2019 - Alexis Delgado Búrgalo seeks out the true essence of a dazzling-looking woman convicted for homicide, in a documentary filmed up-close

This Film Is About Me [+see also:
trailer
interview: Alexis Delgado Búrdalo
film profile] is an up-close film: it’s relentless, penetrating, intimate and true. Its director, Madrid-born Alexis Delgado Búrdalo, positions himself opposite his main character, a dazzling-looking woman with a penetrating gaze, in an attempt to make a natural connection with her and to understand her true essence. But how did he go about doing so in a case as complex as this, where the character and source of his fascination is serving a prison sentence for homicide?

In this his first feature film, which has now been presented in the Revoluciones Permanentes section of the 16th Seville European Film Festival on the heels of its world premiere at Switzerland’s Visions du Réel, the director provides a clear, at times hesitant, but always respectful and sensitive response to this question. With the help of just one single camera and recorder, he moves in close to the face of the woman in question, who’s both serene and volcanic, longing for her moment of glory in the purest of fashions, along the lines of Sunset Boulevard’s Norma Desmond. With a black scarf holding back her blond, curly hair, and with her crimson lipstick and explosive eyelashes, the woman named Renata Felicitas-Soskey speaks, recites poetry by Rainer Maria Rilke and sings, offering up her own particular version of herself.

In decisive English, German-speaking Renata talks to the director about herself (sometimes asking him if he’s bored). She also talks about Persephone, the Greek goddess abducted by the god of the underworld and installed as Queen of the Dead, to whom she ambitiously but rightly compares herself ("it’s to do with death, and with being a goddess "). When the director dares to ask her to talk about the homicide, she reluctantly gives herself over to the cause. With the footnote that she was “completely drunk and out of my mind”, she stoically recalls the events as they unfolded, guided by the questions of her interviewer, who confesses he has doubts over the affair and wants to know more about her awareness of having committed the crime. Through a suggestive and oneiric technique, and amidst the black which floods the screen, the director looks back at the news report covering the crime, which took place in Buenavista, Tenerife.

Assisted in the screenplay by Manuel Muñoz Rivas (The Sea Stares At Us From Afar [+see also:
film review
trailer
interview: Manuel Muñoz Rivas
film profile]) and Samuel M. Delgado (who is currently preparing his first feature film Eles transportan a morte with Helena Girón), Delgado Búrdalo makes the most of other visual and artistic resources which energise the film’s structure and lend depth to his portrayal, such as the seamless fading out which takes place between his protagonist’s declarations, the inclusion of drawings produced for Renata by her victim, images from films from the beginning of the 20th century (Posle Smerti by Yevgeni Bauer, Flower of Evil by Carmine Gallone and The Signal Fire by William V. Ranous) and moving home videos of the protagonist’s childhood.

And so, through their various meetings at the Teixeiro Penitentiary Centre in Galicia, the director and the protagonist arrive at a highly sensitive piece of emotive, film gold, which, as Renata herself affirms, isn’t a film about what happened to her, but is a film on her essence; in short, it’s about her.

This Film Is About Me is produced by El Viaje Films, ADBFilm and 59 en Conserva.

more about: This Film is About Me

Interview: Alexis Delgado Búrdalo • Director of This Film Is About Me

"I never imagined I would be filming inside a prison"

We spoke to Alexis Delgado Búrdalo, who is taking part in MiradasDoc with This Film Is About Me, a doc that made a splash during its screenings at Visions du Réel and Seville, among other festivals

Alexis Delgado Búrgalo seeks out the true essence of a dazzling-looking woman convicted for homicide, in a documentary filmed up-close

The city perched in the Atlantic is about to celebrate the 17th edition of its International Film Festival, spotlighting arthouse films and coming to the aid of movies at the post-production stage 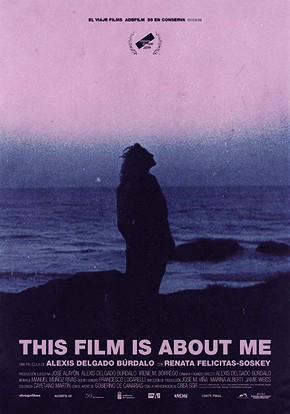