18/11/2019 - Prison, young people, organised crime and rugby all jostle together in the first feature by Uta Beria, who turns to fiction to decipher the ambivalent power of the group and the system in question

“The rules are simple here: you’re either with them or you’re screwed”. The film world had already introduced us to the criminal organisation consisting of “vori v zakone” (thieves in law) by way of David Cronenberg’s Eastern Promises and the international version of the group which appeared therein. But in this instance, it’s the highly developed Georgian roots of this criminal culture - born in the prisons of the USSR and enduring far beyond the fall of communism - which are placed centre stage, courtesy of Negative Numbers [+see also:
trailer
interview: Uta Beria
film profile], the first feature film by Uta Beria, unveiled in a world premiere, in competition, at the 20th Arras Film Festival.

“Is this a secure line? I need to organise an uprising in two months, a country-wide rebellion. You’re in charge of the young contingent. On our signal, the whole prison will go into meltdown. If you succeed, you’ll become the youngest vori ever to be inducted.” Nika (Sandro Kalandadze) listens to his older brother’s orders as if they were gospel as the latter instructs him to carry out a secret mission linked to the recent political upheavals the country is experiencing, which he must bring to a successful conclusion by leveraging on his position of criminal authority; an authority which is fully recognised by his fellow inmates, as well as by the directors of the penitentiary establishment where some thirty minors are serving sentences for assault, attempted murder or crimes of a similar ilk.

A king of sorts in a land where every inmate has his own, individual place (either inside the clan, under the influence of the vori or amidst the group of generalised lackeys referred to as “punks”), Nika oversees the methodical collection of money which each and every members of the criminal group must pass on in this pyramid-shaped system. He wields total control over this isolated environment, but his system will soon short-circuit as a result of the rugby training sessions offered three times a week to the inmates by an external coach (Aleksandre Gugava). As he slowly takes a liking to this game where all are, in theory, equal on the pitch – a premise which inevitably calls into question the brutal prison hierarchy - Nika begins to have his doubts and feels his dominant position wavering, a situation which isn’t without its risks…

Inspired by real-life events, the story - written by the director (based upon an idea by George Duchidze) - paints a very lively and wonderfully accurate portrait of these imprisoned youngsters’ daily life (a routine dotted with incidents, some of which are especially dramatic, whilst others are more than likely included in order to diversify what is overall a rather simple plot), shored up (beyond Nika and the coach) by a number of emblematic characters: the bad guy Melonhead (George Khurtsilava), the ambiguous Zuka (Viktor Barbakadze), the victims Mate (Tedo Bekauri) and Dachi (Lasha Katsiashvili), and the guard Kako (Gaga Shishinashvili). Tato Kotetishvili’s agile camera makes intelligent use of space - despite the latter being in rather short supply (we’re talking dormitories, corridors, recesses, the yard…) - and of the movements made by the group and by individuals in and out of the picture, conveying to perfection (on the scale of a microcosm, and reflecting the macrocosm of the country) just how difficult it is to escape such a firmly entrenched pernicious structure, and demonstrating that breaking free from such a situation can only take place through the combination of brave, personal decisions and the strength to take action together.

Produced by Georgian outfits Magnet Film and Alief alongside Italian group 39Films and French firm Wide, and with the support of Eurimages, Negative Numbers is sold worldwide by Wide Management.

"These young people are both guilty and oppressed"

Georgian filmmaker Uta Beria talks to us about his first feature film Negative Numbers, screened in competition at the 20th Arras Film Festival

Prison, young people, organised crime and rugby all jostle together in the first feature by Uta Beria, who turns to fiction to decipher the ambivalent power of the group and the system in question 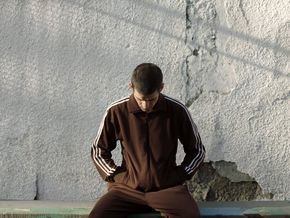