Watching Muscle [+see also:
trailer
interview: Gerard Johnson
film profile] is a lot like going to the gym. It seems like it might be a big ordeal, and there is a lot of blood, sweat and tears, but if you make it through to the other side, there is a hell of a lot of satisfaction. In Fight Club, there is a marvellous metaphorical quote about men trying to solve a personal crisis by getting stronger and more macho: “Self-improvement is masturbation.” Gerard Johnson's film takes this quote almost too literally. Jurors will be hard-pressed to find a more delightfully absurd film in competition at the ongoing Tallinn Black Nights Film Festival.

Shot in black and white by Stuart Bentley (because why not?), the movie’s protagonist is Simon Barrett (Cavan Clerkin), who works in telesales and whose lady Sarah (Polly Maberly) pretends to be asleep when he gets home to avoid the smell of alcohol on his breath. With a plethora of men's lifestyle magazines informing guys that getting in shape and having a six-pack is the route to happiness, Simon decides to join a gym. Said gym is a sweatbox full of beefcakes – there are no leotards or yoga classes here. Simon is a ball of fat compared to these he-men, and so he sticks out like a sore barbell. Simon's life is turned around by Terry, played by the underrated Craig Fairbrass, the British actor who always punches above his weight when it comes to the home market but is usually treated with disdain by those with more discerning tastes.

Terry gives Simon a pep talk about improving his lot. He tells him he's going to train Simon the right way so that he can reach his full potential, and be his personal trainer. As the story takes one of its many unexpected turns, it seems that full potential might mean that Simon is more muscle Mary than muscle man. But before we get there, Simon starts getting fit, and his life improves to such an extent that he turns into the best salesman at work. Clerkin does a Robert De Niro and transforms before our eyes on screen but in a believable, rather than excessive, fashion. The film somehow retains an element of social realism, even when the story starts to go to bizarre extremes. It’s some feat.

The good times screech to a thudding halt when Terry encourages Simon to use steroids to get bigger, faster. It turns him into a raging monster, and pretty soon, he's lost his job and his girlfriend. The downturn in Simon's life has thematic echoes of director Johnson's much-admired 2014 bad-cop drama Hyena [+see also:
film review
trailer
interview: Gerard Johnson
film profile]. It's another cautionary tale about being careful whom one can trust. Terry seems genuine, but pretty soon, he turns into a stalker who is more Swinger White Male than Single White Female. Terry muscles his way into Simon's home and invites half the town over for coke-fuelled orgies. So many elements get packed into the story that the neighbours don't even have a moment to twitch the curtain. Johnson, who also served as the screenwriter, revels in the absurd, and the results are amusing, albeit because sometimes the scenario is joyously preposterous.

This is a film about toxic masculinity and how it can have a tragic impact on men. And just like exercise, it's not for everyone, but those who are believers will find it as satisfying as coming.

Muscle was produced by the UK’s Stigma Films and Hook Pictures, and France’s Logical Pictures. The UK’s WestEnd Films is in charge of its international sales.

Cineuropa talked to Gerard Johnson, the director of Muscle, screened in competition at Tallinn's Black Nights, about toxic masculinity and pumping iron 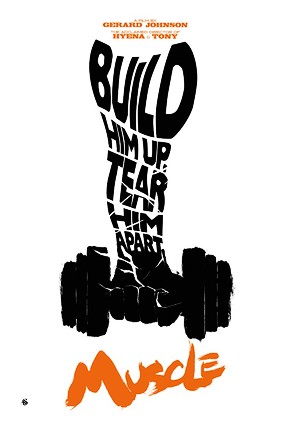