25/11/2019 - Iban del Campo crafts a documentary on a handful of burlesque performers in New York, spokespeople for artistic freedom and militancy who are unafraid to criticise the system

Presented in the Zinemira section of the San Sebastián Film Festival’s most recent edition, following on from its screening in Abycine 2019 (to name but one event), Glittering Misfits [+see also:
trailer
film profile] is a documentary by Iban del Campo (Mondragón, Gipuzkoa, 1971) which is showing in the Escáner section of the ninth Márgenes film festival. This is the first feature film put forward by the director whose earlier short works include the picture Dirty Martini, dating back to 2009 and homing in on the homonymous star of American burlesque.

Their militancy, both in terms of the demands made and the criticisms directed towards American society, is one of the most enjoyable aspects of the film; a work in which we hear the director conversing with his protagonists, leading to moments of great openness and honesty. As was the case in Gustavo Sánchez’s I Hate New York [+see also:
film review
trailer
interview: Gustavo Sánchez
film profile] - which focused on four transsexuals living in the Big Apple – here, too, the total complicity between the director and the people he is depicting allows for moments which reinforce his closeness, and the viewer’s, too, to a fascinating, pugnacious and awe-inspiring world and its inhabitants.

Del Campo, who accompanies his protagonists as they journey to legendary locations along the lines of Coney Island, avoids the talking heads formula typical of journalistic documentaries, opting instead to follow these artists as they travel in taxis, as they sit in make-up chairs ahead of shows, or while they’re at home in their apartments, unadorned, sequin-free, and washing the dishes, for example: it’s here that they choose to make their confessions.

The humanization of these stars oozes respect, affection and luminosity – devotion even - without a trace of morbidity or recourse to sordid details: "We’re people who wield magic", Dirty Martini proudly proclaims. And she’s right: they all use their cabaret platform and the ideological content of their joyous public celebrations of flesh, happiness and humour in order to fight against social taboos, backwards-looking leaders (burlesque was born in New York in reaction to the censorship enacted by Mayor Giuliani, who closed a number of the city’s clubs in the 1990s) and sexual repression. As Tigger! affirms while showing the camera an incorrect spelling of his name in a book, which has left out the exclamation mark that is supposed to accompany it: "If you say it without enthusiasm, it’s just not right".

Glittering Misfits, whose screenplay, direction, photography and editing (alongside Domi Parra and Macías Cantón) come courtesy of Iban del Campo, is produced by the filmmaker’s own company Limbus Filmak.

Watching this energetic Ukrainian documentary by Irena Stetsenko, makes you not only want to see a performance by its starring activist group, Dakh Daughters, but also to be a part of it

Iban del Campo crafts a documentary on a handful of burlesque performers in New York, spokespeople for artistic freedom and militancy who are unafraid to criticise the system 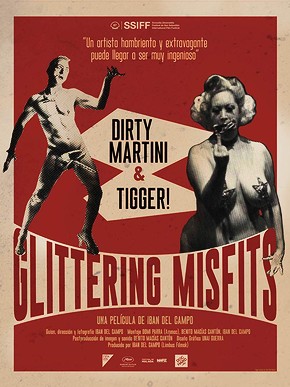