Review: Once the Dust Settles

Major disasters, be they natural or man-made, commonly dominate the news. Often, they are horrific stories that quickly spread among the crowd. But what happens after the news value is gone, after we’ve moved on to the next spectacle or catastrophe? What happens to the locals on the ground once the dust settles? This is the question that acclaimed Dutch filmmaker John Appel poses in his feature-length documentary Once the Dust Settles [+see also:
trailer
film profile], which world-premiered at the International Documentary Festival Amsterdam (IDFA), in the Masters section.

Appel focuses on three seemingly unrelated stories in three different areas of the world: Amatrice in Central Italy, Chernobyl and Aleppo. They are places that had to endure earthquakes, a nuclear disaster and the devastation of war, respectively. The protagonists all have something in common: they once felt relatively safe in their homes, up until the point when the unthinkable became reality. They all use their experience to guide tourists around the disaster zones, as the first curious travellers start to trickle in. The guides see this as a way to share the background of what has happened in their cities and create awareness among visitors. They found that, often, people don’t really know the full story, as news coverage is often one-sided and incomplete. In addition, to them, it is a way of dealing with the events that have been dominating their lives.

One of the protagonists is Alexei, who once took much pride in being an operator at the Chernobyl Nuclear Power Plant at the time of the disaster. Showing an old photo to the camera brings him back to when he was 25 and had just landed this prestigious job. Little did he know that months later, he would be recovering from radiation sickness, which he luckily survived. The area has become an increasingly popular hotspot for tourists, and Alexei finds a purpose in educating them. Walking around with Geiger counters and old gas masks, he takes them around various different sites. Now that the KGB no longer has a grip on the population, he feels free to address the malpractices of the Soviet government during that time.

Another story is that of a woman in Aleppo, who was a tour guide before the war erupted. We witness the first time she takes charge of a group of tourists again after an eight-year hiatus. She is followed by a line of camera-wielding elderly people as she explains about the erstwhile historical and cultural richness of the old town. They listen attentively as she starts to tear up at the sight of the ruins.

The film has a sober style, characterised by quiet and observational shots. And although Appel has no clear role in the story itself, his presence can be felt in the trust his subjects place in him. As they open up, the conversations become more emotional, strengthening their cause in a way, as they all need to find some solid ground beneath their feet again. All of them take a clear stand behind the story they are telling, sharing an important view on their way forward; they should respect and honour the past to prevent it from being forgotten. That, we learn, is an empowering path to follow.

Once the Dust Settles was produced by Carmen Cobos and Kees Rijninks for Dutch outfit Cobos Films BV with the involvement of Dutch broadcaster VPRO. Erik van Empel took care of the movie’s cinematography.

more about: Once the Dust Settles

Review: Once the Dust Settles 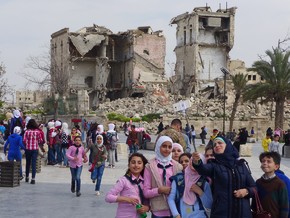