Anthony Hopkins and Jonathan Pryce in The Two Popes

In 2013, Pope Benedict XVI was the first head of the Catholic Church to resign for almost 600 years. The decision to replace the German with Argentinian Pope Francis was widely reported in the world's media as a sign of the Catholic Church moving away from the stern, traditional approach of Benedict to a more liberal, all-encompassing and progressive future under the new head. The Two Popes [+see also:
trailer
interview: Fernando Meirelles
film profile], based on Anthony McCarten's play The Pope, argues that this analysis is too simple. It posits that the two men are not really so different.

More surprisingly, the cinema adaptation takes on much more of a lighter tone than the theatrical version. It uses comedy and fraternity to bring out the humanity of the two men. At its heart are two formidable central performances from two Welsh actors. Anthony Hopkins brings understanding to Benedict, and Jonathan Pryce, who is a dead ringer for Francis, shows the requisite flamboyance and heart to rouse affections. Both men have received Golden Globe nominations for their performances. Oh, this is also a tale built around four F’s: friendship, fashion, food and football.

The inspired decision to appoint The Constant Gardener [+see also:
film review
trailer
film profile] director Fernando Meirelles to the director’s chair leads to an emphasis being placed on the past of Francis when he was still known as Jorge Mario Bergoglio. In a series of flashbacks to his life in Argentina, Juan Gervasio Minujín plays Cardinal Bergoglio. It makes sense that a different actor should play Pope Francis, as not only did he go by his different birth name during this time, but it's claimed that he was also a completely different man. In his younger days, Cardinal Bergoglio was a hated figure in Argentina, heavily criticised for failing to protect the clergy and others from the military junta, a cloud that still hangs over him in his native land. In contrast, Benedict's failure to deal with paedophilia in the Catholic Church is mentioned but less well scrutinised, and a sign of this lack of analysis is the decision only to show Benedict as an octogenarian.

The bulk of the film is an imagined series of conversations between Benedict and Francis. The dialogue is witty, fast-paced and well judged. The narrative irony is that when they first meet, it’s Francis who wants to resign. Big themes are discussed, but in a way that is designed not to offend. It is very genteel, which might cause consternation in some, given the stories that were at the time, and are still, coming out about the Catholic Church. The Two Popes is a far cry from the deconstruction of the institutions of the church seen in films such as Peter Mullan's Golden Lion winner The Magdalene Sisters [+see also:
trailer
film profile] or the Berlin Grand Prix laureate The Club.

The reason why The Two Popes is such a good watch is that it takes a difficult subject and packages it in a manner that will have broad appeal. It takes some guile and cunning to create moments of penetrative observational comedy. Food, fashion and football are used to elucidate certain points and highlight cultural differences, just as they are in real life. The film is not afraid of the big topics; it just chooses to prod, rather than poke, and it all unfolds in lavish sets. Meirelles captures something important in the era of fake news: the fact that when we scratch beneath the surface, the truth is very rarely black and white.

The Two Popes is a US-Italian-Argentinian-Uruguayan co-production. It was produced by the USA’s Rideback and Netflix, Dan Lin, Jonathan Eirich and Tracey Seaward, and executive-produced by Mark Bauch. The other production outfits involved were Italy’s Lotus Production (a Leone Film Group company), Argentina’s K&S Films and Uruguay’s Oriental Features.

more about: The Two Popes 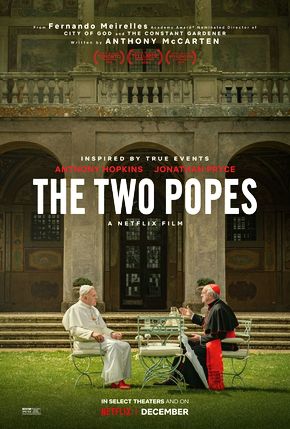