Soon after Hitler and his National Socialists came to power, the first "protective custodies" were set up in abandoned or repurposed schools, youth clubs, factories, culture houses and other spaces. By the Spring of 1933, 200,000 political opponents, members of the Communist and Social Democrat parties and "Marxists" were already imprisoned in what were, effectively, concentration camps. Ute Adamczewski's first feature-length documentary, Status and Terrain [+see also:
trailer
film profile], winner of the Best German Film Award at the recent DOK Leipzig, explores this little-known fact through letters, victims' testimonies and official documents of the SA, SS and administration centres in Saxony, where the practice was most widespread due to the fact that this region was a stronghold of the labour movement and thus considered the most dangerous for the Nazis.

The term "protective custody" comes from a Nazi elaboration in a newspaper: the public mood was “so heated” that the ruling structures could not guarantee "safety" for opponents of the dominant ideology. In other words, it was not the National Socialists who wanted their opponents out of the way, but the nation itself, in its righteous enthusiasm for the purity of the German race. In the same spirit, this kind of protective custody was not referred to as prison, but rather as a camp for re-education in "Germanness".

If this mechanism of maliciously inverted logic reminds you of today's discourse, it should. Status and Terrain takes these documents, read by a woman in voiceover, carefully including date and signature, and contrasts them with present-day footage of places in Saxony where these institutions used to be located. We watch various locations in Dresden, Struppen, Chemnitz, Waldenburg, Sachsenburg, Hochstein, Reichenberg on a sunny autumn morning or a snowy winter evening as we listen to what happened there in 1933, 1936 or 1940. Some of these places are historic sites, such as the infamous Colditz Castle or the Münchner Platz in Dresden, while in the place of another stands the parking lot of a supermarket with a memorial plaque hidden somewhere in overgrown bushes.

The multiple layers of this complex film mirror each other so efficiently that when the camera of DoP Stefan Neuberger (who also, indicatively, lensed Thomas Heise's Heimat Is a Space in Time [+see also:
film review
trailer
film profile]) focuses on the boots of a Santa Claus at the Christmas market in Annaberg, we can practically hear the sound of marching soldiers' boots. When the voiceover reads a witness testimony about a group of skinheads barging into a bar in 1990 and terrorizing the patrons who vastly outnumbered them but stayed silent, we are not surprised. When we hear a listing of SS guards that included a tailor, a merchant, a lawyer’s clerk and a baker’s apprentice, our mind easily pictures any right-wing rally of the 21st century.

In the German title of the film, Zustand signifies a state or condition that is fixed but is also temporary in the interpretative sense, while Gelände is a site or a landscape that is defined and measured and may serve a specific but changeable purpose. This is the basic layer of the film, which in turns draws parallels between and contrasts conditions (human and political) with spaces (physical and symbolic), showing the way memory is useless if it isn’t maintained through physical representation (writing or building a monument). But this isn’t enough, either: memory needs to be refreshed as the readings of such representations change through different eras, and Status and Terrain is a timely and insightful attempt to preserve and recontextualise events and ideas we have been taking for granted for too long.

Status and Terrain was produced by Ute Adamczewski.

more about: Status and Terrain 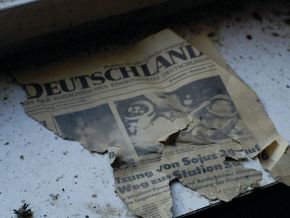