Review: The Goddess of Fortune

19/12/2019 - Ferzan Ozpetek returns to Rome with a touching and melancholy film on how love changes over time, revolving around a male couple in crisis who are entrusted with two children

The difficulties encountered in a relationship which has lost its spark - and the tragicomic effects that come with this - not to mention the promise of a new beginning, albeit unexpected and overwhelming, are at the heart of Ferzan Ozpetek’s touching, entertaining and highly personal, new film The Goddess of Fortune [+see also:
trailer
film profile], which signals the return of the Italian director of Turkish origin to Rome (following previous works filmed in Naples and Istanbul) and to the world of extended families, love in all its forms, and pure, unadulterated emotion.

It’s an authentic, joyful and motley version of humanity – a real triumph for diversity – which throws its arms around the viewer at the beginning of the film, in the wake of a disconcerting prologue set in the halls of a sumptuous aristocratic residence, which we won’t see again until later in the story. We’re on a beautiful Roman terrace, celebrating a gay marriage, and all the main characters are there, first and foremost our hosts, Arturo and Alessandro (Stefano Accorsi, who previously starred in Ignorant Fairies and Saturn in Opposition, and Edoardo Leo), a couple nearing their fifties who are clearly in crisis. All of a sudden, Alessandro’s best friend and former girlfriend Annamaria (Jasmine Trinca) bursts in, suitcases and kids in tow. She won’t be staying long (she’s due to be hospitalised on account of suspicious headaches), but her children Martina (Sara Ciocca) and Alessandro (Edoardo Brandi) are there for the long haul, whether the two men like it or not.

Thus, we follow in the day to day life of Arturo and Alessandro, who are catapulted into the other dimension that is “parenthood” at the worst possible moment in their fifteen-year-old relationship. Accorsi and Leo are perfectly matched, the former in the shoes of an intellectual and a failed teacher, and the latter as a more self-assured and settled plumber (who speaks to his taps), the two of them sucked into a spiral of recrimination and betrayal. Ozpetek lends sincerity, but also a healthy dose of withering lines (the director penned the screenplay alongside producer Gianni Romoli and Silvia Ranfagni) to a story which conveys the agony that comes with deep, deep love; a love which can be reignited with just a look or with a burst of laughter, owing to the complicity shared by this couple, who have lived their lives together for many years, and who now find themselves faced with a level of responsibility which goes above and beyond their problems.

Trinca radiates love and courage in her role as Annamaria, a free and rebellious young woman of noble origin, who’s on bad terms with her stern mother (played with surprising incisiveness by the writer Barbara Alberti), a woman who thunders into their lives like an earthquake and deals a sledgehammer blow to the lead couple’s carefully constructed equilibrium. Also starring in the cast are the unmissable Serra Yilmaz and transgender actress Cristina Bugatty, as well as Filippo Nigro and Pia Lanciotti in the shoes of a couple who fall in love with one another each and every day - he, suffering from Alzheimer’s, sees his partner as if for the first time, every single day. This is arguably the only melodramatic aspect in a work which is otherwise unsentimental, focused and engaging, featuring the music of Pasquale Catalano (who previously worked with Ozpetek on various films, not to mention Sorrentino) and the unmistakable voice of Mina.

The Goddess of Fortune is produced by Warner Bros. Entertainment Italia, R&C Produzioni and Faros Film, and will be released in Italy on 19 December, distributed by Warner Bros. Pictures in over 400 cinemas. International sales are in the hands of True Colours.

more about: The Goddess of Fortune

Interview: Ferzan Ozpetek • Director of The Goddess of Fortune

“With parents, it isn’t what’s below the belt that counts, but what you find due north, where our hearts and minds reside”

Presented at Venice’s Giornate degli Autori, the third feature film by Giorgia Farina is an unusual road movie which makes its way across Europe

The visionary work by Carlo S Hinterman, with executive production by Terrence Malick, will open the 35th edition of the Venice Film Festival's sidebar 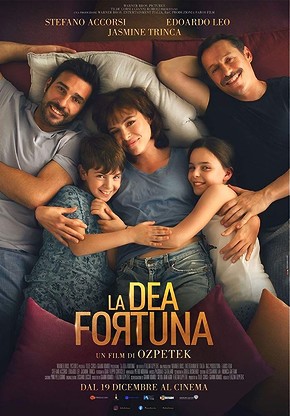 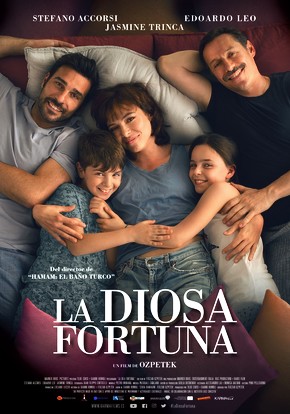 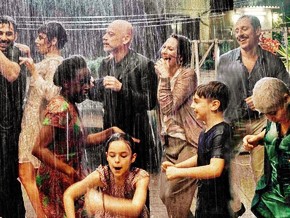 Produce – Co-Produce... – 25/10/2021
The Slovenian Film Centre publishes a study on the accessibility and competitiveness of European audiovisual works from small language environments
The research provided a number of key findings in terms of public funding, incentives and film policies

We talked to the up-and-coming Czech-Vietnamese animator and director, whose latest short film keeps reaping awards on the festival circuit

We talked to the Belgian filmmaker, who delivers with his feature debut a marked wink to the US family-friendly cinema of the 1980s