Thomas Guy, Benjamin Voisin and Guillaume Arnault in Man Up!

There have been a great number of initiatory stories on the topic of adolescence depicted on the big screen, mainly because this age is associated with one of the greatest mainsprings of cinematic narration: the overcoming of obstacles. When it comes to this highly popular route (taken by filmmakers of varying levels of talent who achieve varying degrees of success), some choose the path of drama, others that of comedy, mainly because any territory falling in-between these two is far harder to negotiate, due to the delicate balance that must very clearly be struck and the need for sincerity in terms of content. But it is precisely this frontier that is explored with indisputable accuracy in Man Up! [+see also:
trailer
film profile], Benjamin Parent’s very first feature film, released in French cinemas today courtesy of Ad Vitam; a film which knows how to draw tender smiles from its audience on moving and difficult subjects such as bereavement and the dictates of masculinity.

How do you illustrate the inner voice of a puny teenager and his search for identity in the face of a high-school universe where appearance-based dictates automatically categorise some as dorks and others (sporty, loud-mouthed kids, dressed trendily and better adjusted) as popular? This is the lonely path taken by the director and his co-screenwriter Théo Courtial, a perilous option which turns out to be a largely winning choice, because, not only does it see them reveal two excellent young actors to the world, but fundamentally, it allows them to drill down with far greater depth into the film’s central subject: the social strictures surrounding the definition of masculinity. Their protagonist, Tom (Thomas Guy), who’s 16 years old but who looks much younger, effectively lives in the shadow of his deceased brother Leo (Benjamin Voisin), an accomplished sportsman who boasted a relaxed and magnetic personality and who died at 19 years old in a car crash two years earlier. His death weighs heavily upon the boys’ father in particular (Laurent Lucas), who had a lot in common with his eldest. Their mother (Isabelle Carré), meanwhile, tries to look towards the future as she waits for her new baby to be born. Psychologically damaged and unsettled by the death of his adored big brother who was something of an unattainable role model for Tom, who is far from measuring 1m 85 and displaying the same relaxed manner as Leo, our protagonist now lives in the nigh-on permanent company of his brother’s ghost, who gives him advice, encouragement and lovingly mocks him as he tries to integrate within a new high school and get himself noticed, liked and loved by the beautiful Clarisse (Tasnim Jamlaoui), as well as respected by top boys (and, on occasion, harassers) Steeve (Guillaume Arnault) and Victor (Mohamed Seddiki). All this while trying to preserve his friendship with the fanciful JB (Niels Othenin Girard)… It’s an ambitious list of objectives which will be anything but easy to achieve, but which will ultimately help Tom to discover who he really is and to break free from the past and the burden of conventional expectations.

Very well embellished by the photography of Pierre Cottereau and a musical score from Saycet, Man Up! is a pleasant surprise which, despite the difficulties inherent to mixing realism and fantasy, ultimately rises to the challenge with great ease and without ever forcing the issue, resulting in a film that’s both easy-going and profound. Moving in his shaky desire to overcome the permanent stress he feels at not measuring up, the character of Tom exudes a strong perfume of authenticity, which takes the conventions we find in films about high-school life and transforms them into lessons on the yoke of social conformism and on the arduous quest for individuality.

more about: Man Up! 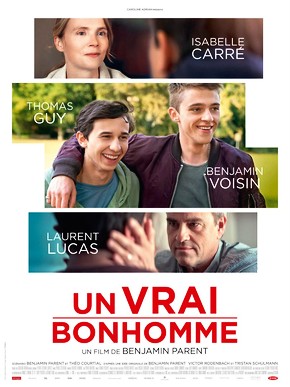 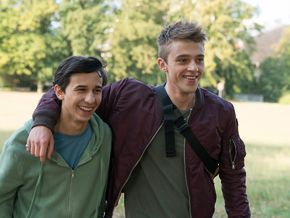