Andrea Bræin Hovig in Light From the Chocolate Factory

The way in which Dag Johan Haugerud is currently making films is rather like buses: you wait for ages for one to arrive, and then two come along at once. First, there was his epic 157-minute Beware of Children [+see also:
film review
trailer
interview: Dag Johan Haugerud
film profile], which debuted in the Giornate degli Autori and will soon be in competition at the Göteborg Film Festival. Now comes the brisk, 65-minute Light From the Chocolate Factory [+see also:
trailer
film profile], which has just had its world premiere at the Tromsø International Film Festival, in the Norwegian Horizons section.

Unsurprisingly, perhaps, given the temporal proximity with which the two films have been created, the two separate productions share many elements: a protagonist's guilt over an accidental death, an interest in the state of the Norwegian nation, especially the support for right-wing politicians, and even the cast. But where Light From the Chocolate Factory stands alone is with the comedic flourishes and the adherence to the principles of the French New Wave, especially the point at which Éric Rohmer meets Jean-Luc Godard. Festival directors around the world should be rushing to play Haugerud double bills at their events.

The film is split into five chapters and an epilogue, each of which depicts a different scene, inevitably involving characters in deep conversation about life, music and morality. At the heart of the movie is a spectacular performance by Andrea Bræin Hovig as Ingrid. The opening shot is a blurred image of her, and as the lens comes into focus, the camera stays on her, even as we hear her friend Maria (Henriette Steenstrup) asking questions and contributing to the dialogue off camera. Ingrid has to compose a song for her friend's wedding and decides to enlist the help of some pals. She is suffering from anxiety because she's convinced that her own negligence has caused her mother's death and that she should go to the police and confess.

It's a film that finds amusement and bemusement in the lives of the characters. Ingrid, an estate agent, berates two potential young buyers of an apartment about them buying a house at a time of refugees and homelessness, only to find out that one of them voted for a right-wing candidate and wants to stop immigration. Then there is the teacher who has been suspended from school because some kids spied on him and consequently saw him in a compromising position. Haugerud illustrates that it's the kids themselves who caused the situation by breaking the rules, yet the adult, who has ostensibly done nothing legally wrong, is being punished. The helmer wants to confuse the audience, looking at stories from different angles, and questions whether the actions spoken of are right or wrong. There is even a scene without Ingrid, in which Maria talks about her, and it's hilarious when her real thoughts and feelings come out.

The cherry on top of the wry and delightful Light From the Chocolate Factory is the score, featuring classical music by Joseph Maurice Ravel and Claude Vivier.

Light From the Chocolate Factory is a Norwegian production staged by Motlys and Yngve Sæther.

more about: Light from the Chocolate Factory 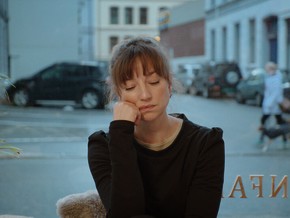